I think I will remember this forever… 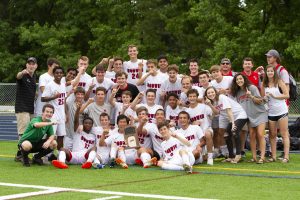 The team poses for a photo after their win. Photo Sandy Spicknall.

Among smiles, whoops, and tears of joy there was this.

“I think I will have this memory forever.”

That was the reaction from Mills Godwin senior Chris Ondoua shortly after Godwin captured the VHSL Division 5 state championship with a 4-2 win over neighbor and rival Deep Run at Hermitage High School on Saturday, June 7.

Ondoua is one of 11 GHS seniors who will graduate with state championship memories.

The match was filled with opportunities and momentum swings, but the Eagles maintained much more offensive pressure throughout.

Despite Godwin’s domination of possession, Deep Run ran to an early 2-0 advantage with lightning strike goals, the first a header off a 50-yard service near the goal, and the second a score off a redirected corner kick.

Godwin, however, did not wilt. Eagle senior Jin Kim told his teammates that “this is the last time we wear this jersey.” 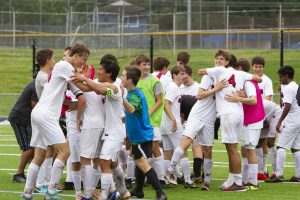 Additionally, head coach Cody Johnson, in his third year, quickly reminded the team that no one expected a defensive struggle, a “clean sheet” in soccer terms. “They battled and never dropped their heads, said Johnson.

Those predictions were quickly proved true by three Eagles goals in the final 21:00 of the first half. First, Onduan gathered a middle pass, juked ahead of the Deep Run defense, and slid the ball into the lower left corner of the goal to close the deficit to 2-1.

Six minutes later, a Deep Run foul in the box gave Kim a penalty kick opportunity. Kim blasted the ball past the keeper to tie the match 2-2.

Godwin continued to dominate play and cashed in again with about two minutes left in the half. Following a cleared Godwin corner, junior defender Artemi Bukin crushed a long ball from about 40 yards that flew into the upper left corner of the net. After a 2-0 deficit, the Eagles took a 3-2 advantage into the half.

Less than eight minutes into the second half, senior Jacob Thomas, who had never played for GHS prior to this season due to Academy commitments, gathered a pass on the right sideline. With stop and go moves, Thomas beat his defender and the help and punched the ball past the keeper to give the Eagles’ the lead they would not relinquish. 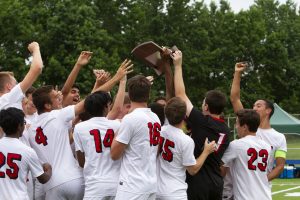 The final 32 minutes provided solid chances for both teams. Deep Run missed two shots at open nets and had one nicely saved by GHS senior keeper Nikos Mouris who was playing with an ankle injury suffered in the semifinal 3-2 overtime win over Freedom High School.

Two red cards incurred by Deep Run around the five-minute mark provided Godwin with a two-man advantage the rest of the way, and Deep Run could not mount another serious scoring threat.

Thomas summed up his feelings, “This is incredible. This is completely different from club. There it’s individual, and this is team. I love these guys and my school.”

Senior Will Killius: “The weather helped us not being as hot as it was in the past two years. Knowing Deep Run and their strengths also helped. This is just unbelievable to finally accomplish this.”

Senior Jin Kim: “No words. Wow, just no words. After three years of heartbreak, this feels so good to win in our senior year. Godwin soccer just pushed through.” Kim will play at George Washington University next year.

Senior Chris Ondoua: Ondoua moved from Cameroon to the U.S. five years ago. He was playing in front of his father, who traveled from Cameroon, for the first time ever.“I never played on a team before. They have taught me so well, and I have so many good friendships. [With his father in attendance for the first time] I knew I had to show up and score goals. I think I will have this memory forever.” Ondoua will attend JMU and try out for the soccer team.