A Life of Influence 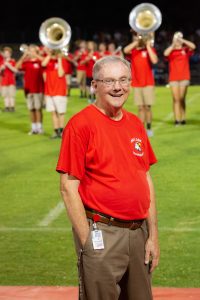 How do you define a great teacher? Someone who cares about their students as people, wants to further their students’ education or someone who shows a passion for teaching that makes class a genuine experience? Regardless of which is most important to you, Vernon “Leon” Auman in his 35 years of teaching checked about every box to be a great teacher there is.

Auman had a way of filling people with life by being around them and inspiring people to do better by example. For many people, Auman’s personality was what helped lead them to join band and stay in it.

“Once they were here, he had them,” said Beth Esleck, a long-time band parent and associate of Auman.

“He had a good time and that makes such a difference, especially in a program like this. Music is supposed to be fun. High school band isn’t about great music only, it’s about relationships and camaraderie and a place to belong.”

Auman was extremely passionate about everything he did, especially treating his students well. Whether it was making them physically safe in the many activities and trips he oversaw or simply making people feel accepted.

“I liked his fiery spirit and what made him really different was he saw students as people with value and was accepting of everyone,” said senior band member Brady Wortzel.

It was this drive to help and his devotion to his students that led him to never retire. Auman intended to retire this year, but he said he loved his job teaching too much and couldn’t bring himself to leave. When he thought about the excitement the next year would bring for all his new students, he rescinded his decision to retire to the joy of many students.

Auman was not only incredibly kind and accepting of those in the band, but he was always happy to welcome others with open arms.

“He was so sweet and accepting when it came to people joining band. If someone wanted to learn something he was dedicated to help them out with it and help them become better,” said junior Nicole Mitchell. “He was always so caring. If someone had a problem, he would go and see if he could do anything to help.”

Through the years it wasn’t just how he invited people to join the band either, after leaving students who were close to them could always count on him as a friend and even still a guiding example long after graduation. Stretching back years Auman was always a paragon.

“I remember watching him [Leon Auman] juggle being a parent and teacher with all of his extra responsibilities that being a band teacher included. He taught me how to juggle these things in my own life by watching and seeing that, even with all that he had going on, he still made every student feel like they meant to world to him. When he passed, we all gathered and the number of people that felt valued by Leon was staggering. He became part of our lives after school, attending our wedding, family celebrations and taking on a new role of dear friend. I can only imagine that his heart would have overflowed at the memories that were shared and the impact he made on our lives,” said Mara La Fratta Brennan, a 2001 Godwin graduate and former band member.

Auman was also an excellent mentor. He always approached life’s problems in stride, even his own illness or things much less serious, such as certain sections not paying attention during class time.

“I could throw a hand grenade back there and you all still wouldn’t notice,” Auman would often say.

Auman had a way of using teaching music as a conduit to teach greater lessons about being a decent person. Whether it be teamwork, as cliché as that sounds, or general respect for others and compassion.

“Life is rough and then you die,” he’d often say jokingly. But contrary to that saying, he never went out of his way to make things rough to sort of demonstrate as some teachers might do by increasing workload. He let people experience for themselves both the good and bad.

Once in summer practices for the marching band, we were having some trouble with a particular formation, and one of our seniors ran into our soloist because it was a tight squeeze. “You won’t drown,” Auman said in response to being told about the issue.

It may sound ridiculous, but Auman had a way of saying things that you really couldn’t ignore even if they were jokes. If you aren’t going to drown, just keep on going. After hearing that sort of thing every day, it rubs off on you and you learn to think it on your own and start to solve things independently or with your classmates.

Auman constantly showcased his ability to believe in the problem-solving potential of his students and resolved to always hear people out and help where he could, but he also helped people help themselves.

“He let his students have a say,” said junior Olivia Ellsworth.

Auman recently passing away is something one who knew him can’t help but be reminded of on a daily basis. Beyond simply seeing the memorials and good wishes that adorn the hallway outside the band room and the room itself, his absence itself speaks volumes more about the breadth of his presence and personality than anything else.

“He was an inspiration and taught me to be beyond a musician,” said junior Hunter Haas.