Music is a hobby for many people, but for Godwin sophomore Aelan Snyder, playing the harp has grown from a simple hobby to her greatest passion. It has been a great influence on both her life and the person she is today. 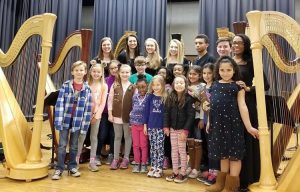 Snyder has been playing the harp since she was nine years old.

Over the past six years, music and playing the harp has taught her lessons and given her opportunities all across the globe.

Snyder’s passion for music began at birth. She was born into a family in which her mom’s side was made up of musicians, so Snyder was surrounded by music for her entire childhood.

“I remember growing up, my grandfather would sing and play Peter Paul and Mary songs on his acoustic guitar and memories like that just led me to gravitate to music,” said Snyder.

Throughout her childhood, Snyder has had numerous people who mentored and encouraged her from the moment she first began learning how to play the harp.

“My directors and my friends have all consistently encouraged me to continue doing what I love. My teachers are incredible and so knowledgeable about everything dealing with music. There is nowhere in the world that I could have been given a better foundation for my music education,” said Snyder.

Snyder also finds support in the eight-person ensemble she plays in. The other members have come to be like family to her.

This close-knit group has played a major role in Snyder’s career and has served as a support group along the way,

encouraging her in her pursuits not only in playing the harp but in everything she sets her mind to.

“It is great to have a group of people to turn to, especially since we share a common interest and passion. We are always there to help, support, and challenge each other. If one of us is struggling, we always jump in to help. We challenge each other because the younger harpists can always look up to the older members, myself included,” said Snyder.

Growing up, Snyder’s childhood differed from the normal course, since a great deal of it centered around her growing her musical skills by playing the harp.

It was a daily activity in her life from a young age. When most children were playing team sports or going on vacation, Snyder had daily training in music performance, much of which included playing the harp.

“I definitely found all of the practice difficult at times. Instead of going out with friends on Fridays, I had to rehearse for hours at a time and go to music theory and music history classes. I had to mature faster in order to deal with the added responsibilities I was taking on,” said Snyder.

Additionally, whenever they have a performance coming up, there is an added Saturday rehearsal that runs from 9:00 am to 2:00 pm.

“It is a challenge to devote so much time and effort to something that isn’t school. I also find it hard at times to keep it a fun activity instead of an obligation, especially because the academy can be so strict. It really is hard work, but it always pays off when a performance comes together in the end,” said Snyder.

Despite the challenges faced early on in her musical career, playing the harp has brought unique experiences and opportunities to Snyder that have helped her grow as both a person and a musician.

“I wouldn’t change it because it has taught me so much about time management and professionalism. It has led me to so many amazing opportunities with traveling and recording that, otherwise, I may have not have been able to participate in,” said Snyder.

Snyder has recorded multiple albums in which she plays the harp, one of which was nominated long list for a Grammy.

“To be nominated long list means that we were nominated, but did not make it to the final five nominees. It was definitely a huge step in the right direction for our ensemble,” said Snyder.

One of the albums was called “Caravan” and she has also recorded numerous holiday-themed albums. Snyder is currently working on an album with the royal harpist, Claire Jones.

Snyder has also been on multiple music tours, allowing her to travel and pursue her passion all across the world.

She has been on an East Coast tour that ended with her performing in Carnegie Hall.

When at Carnegie Hall, Snyder played for about 300 people. Snyder plans to return in 2020, however, this time she will be playing for almost 3,000 people.

“My first performance there felt incredible because of the significance and history of the concert hall. It was definitely a monumental moment in my career. We began preparing a year in advance with extra rehearsals on the weekend in addition to my regular schedule. It was just a moment of realization that ‘oh my gosh, we’re playing in Carnegie Hall right now. This is where The Beatles, Led Zeppelin, and the Rolling Stones played’,” said Snyder.

Snyder has also been on a tour throughout England and Wales with the royal harpist who played for William and Kate’s wedding.

“The tour was such a great experience. I met so many incredible harpists in the two weeks I spent there,” said Snyder.

In the future, Snyder is planning on a music tour throughout Austria, Germany, and Hungary this summer. This will be the first central Europe tour for the young harpist.

Outside of playing the harp, Snyder is particularly excited to see Vienna and the hot springs outside of Budapest on her tour.

“The tours and traveling have helped me to experience more of the world and understand the impact of harp and music in other countries. Classical musicians and performers are a much bigger deal in Europe than they are here. Every tour I go on helps me to make major improvements in my playing simply due to the lengthy amounts of time I spend doing so,” said Snyder.

However, all of the travel and touring does not come without sacrifice. The grueling travel time and hours oftentimes leave Snyder playing on minimal sleep.

“The biggest challenge that comes with touring is definitely the lack of sleep. Once I went 42 hours without sleep whilst having double performances each day. My friends and I would always explore where we traveled, but we worked to grab quick naps whenever we could,” said Snyder.

Snyder also struggles with balance between the touring, performances, and her academics.

She does have to miss school at times for music-related activities or gigs. It also inhibits her from having many other extra-curricular activities since it is so time-consuming.

“I do find harp and school extremely difficult to balance simply because they are both so incredibly time consuming and both significant and important to my future,” said Snyder.

Similar to many other young, aspiring musicians, Snyder has idols that she has looked up to and respected throughout her musical career.

Due to her hard work, Snyder has had the opportunity to meet many of these people in the flesh, something that has helped shape her as a person and musician while teaching her life lessons as well.

Snyder has been able to work with Alice Giles, a famous harpist that has played on every continent and Grace Cloutier, an esteemed French harpist.

“Meeting Alice and Grace showed me what my future could be like if I chose to become a performer. They both seemed to take a great liking to me and spent a great deal of time helping me through more complex pieces of music,” said Snyder.

Snyder has also had the opportunity to get a peak of what college life would be like as a musician because she has been able to work with directors of university music programs. One director Snyder has worked with is the orchestral director at the University of Richmond, Alexander Kordzaia.

“Meeting directors and conductors is always so much fun. Every director has their own style of teaching, conducting, and interpreting the music. The orchestral director at University of Richmond is one of my favorite people I’ve had the pleasure of meeting because of my music career,” said Snyder.

Playing the harp has taught Snyder skills aside from ones that are music related.

It has taught her how to balance her workload and full schedule without drowning in the process.

Additionally, playing the harp has taught her determination and patience. It has also shown her that practice makes perfect, and that is true in more areas than just playing the harp.

“It has made me much more responsible and devoted. I can definitely attribute my determination to succeed and time management skills to my musical career and playing the harp,” said Snyder.

Music also helps Snyder deal with stress, challenges, and lack of balance she comes to face in other aspects of her life.

“When I play, I forget about everything else around me and it’s an outlet to release any emotions from the day. Whenever I had family issues or got stressed over school, harp provided an escape from all of that. I could sit down and get lost in playing for a good hour and a half. It provides a good and healthy distraction,” said Snyder.

Music has come to be an activity that brings Snyder so much joy and she loves to share this joy with others, inspiring them to also find what makes them feel the same way, whether it be musical or otherwise.

“I do love to inspire people and I’m happy if I can get one more person interested in music or playing the harp. I also love to share my passion with younger kids because I feel secure in knowing that there will be another generation of great harpists. If I inspire someone, then I feel that I am doing my job as a musician,” said Snyder.