Godwin senior, Natalie Christensen, an emerging photographer, composer, and filmmaker, was recently nominated and awarded for her film, The Astral Project, at the Oregon Cinema Arts Festival. 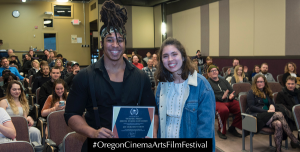 The mission of this local festival was to show socially and artistically significant films.

“It was a pretty amazing feeling,” said Christensen.

Christensen found her passion for cinematography during her sophomore year at Henrico High School where she was a student in the Center of the Arts.

“My experience at Henrico High School was pretty good. It taught me a lot about cultures that I had never experienced,” said Christensen.

Christensen started an internship with a Richmond based film company to make a film but didn’t find immediate success.

“When the internship didn’t work out I was disheartened and I was going to give up. I then realized that I had gotten the internship, I had planned out the whole film, and I had the tools to make the opportunity happen for myself anyway,” said Christensen.

However, a former member of the company, Aaron Rosapepe, reached out to Christensen shortly after offering to give her the necessary equipment to create a new project.

“[The experience with Rosapepe] was so cool, especially because we were given the privilege to use a professional Red Camera, which is known to be one of the most expensive and elaborate cameras to use while filming,” said Christensen.

The film features the photography of Fran McDaniel, a close friend of Christensen.

The film portrays how creative outlets such as film and writing can give you a close sense of nostalgia and help you hold onto memories.

“I wanted to make this film because it really shows how art helps us process moments in our pasts and make better sense of the present moment. It captures what we love,” said Christensen.

Christensen chose McDaniels because he is “a really good voice for people our age and has the same perception of the importance of capturing raw memories through art.”

She found that it was more difficult to work around other peoples’ schedules.

She submitted “The Astral Project” through FilmFreeway for the Oregon Cinema Arts Festival on Sept. 9 and was notified shortly afterward that she was nominated for several awards.

Christensen flew to Portland, Oregon on Thursday, Jan. 10 in time for the event being held on Saturday, Jan. 12.

“It was an amazing way to start off all of this, and I feel more confident than ever that I can take on the film industry. 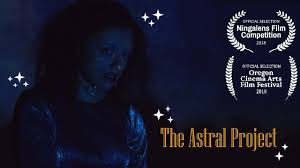 It gave me confidence that not only will I be ‘good for my age’ or ‘good for a woman’ at filmmaking, but I can also be good in general if I work hard,” said Christensen.

Christensen was accepted to Loyola Marymount University for early decision and will be attending for the 2019-2020 school year.

“I think ‘The Astral Project’ is what got me accepted into LMU because I submitted it along with my portfolio,” said Christensen.

Other than NYU, LMU is one of the only schools in the nation that allows you to keep your film rights.

“All other film schools take the rights to the films you make, so you can’t make money off of them,” said Christensen.

Christensen also released her own single on Jan. 5 on Spotify and Soundcloud called, “Live Alive.”

She also plans on filming a music video. For more information, go to Christensen’s very own website, natmixedmedia.com.