Godwin teacher builds his own house 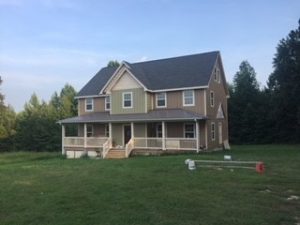 Choosing to move into a new house can be a long process that requires a great deal of planning and thought. This could not be more true for Godwin English as a Second Language (ESL) teacher, Robert Hill, who not only moved into a new house, but actually built it himself.

In 2013, Hill’s father, a farmer who raised goats, suffered from a health condition that forced him to leave the land he had been renting for many years.

Not wanting the family’s farming tradition to end, Hill decided to search for a piece of land big enough to hold the animals. Hill ended up finding a 90-acre property. The small, pre-existing house on the property was converted into a barn and cottage for Hill’s father.

Hill was then inspired to begin construction on a house of his own on the land. This decision required a lot of planning, as well as meeting with a draftsman.

“A year before we started building, we met with a draftsman and hashed out a rough idea for a floorplan. One of our sons expressed interest in the process, so we bought him some home design software for Christmas and he spent several months recreating and refining the original blueprints,” said Hill. “Those were the plans we gave to the contractor.”

The construction officially began on Sept. 28, 2016. The house was worked on for more than two years. Prior to the beginning construction, Hill had some special skills that came from being raised on a farm and some construction jobs that he worked over summers.

“We did a lot of research online, including hundreds of YouTube videos, asked tons of questions and figured out the rest by trial and many, many errors,” said Hill. 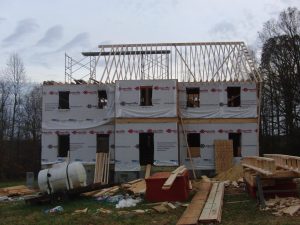 Hill hired the contractor to build the foundation, roof, and frame. Additionally, someone was hired to work on the plumbing and the heating, ventilation, and air conditioning (HVAC).

“One of our friends, a retired electrician, volunteered to teach us how to run the electrical wires, and we had several other friends who helped out with tiling, hanging drywall and painting,” said Hill.

Hill was involved in nearly every part of the building process, with the exception of painting.

“One of the most exhausting parts was the time and energy it took for all of the decision-making involved – endless hours researching, discussing and shopping for materials,” said Hill. “One of the most difficult parts of the actual building process was mudding and sanding drywall.”

While Hill enjoyed the process and found it fulfilling, the project was not without its challenges.

“There were multiple times I was frustrated with not knowing the best way to do a particular task and with having to fix mistakes, but I loved the entire process,” said Hill.

Another benefit of building the house themselves was that it was less expensive to do that “It was a joy and privilege to work with my family on such a big project, especially being able to see my children develop patience and grit, along with learning the value of the skilled trades,” said Hill.

The house has been completed and Hill has just recently moved into the new house.  The finished house is two stories with four bedrooms and three bathrooms. Because Hill built the house, he was able to implement special features such as a Japanese-style bathroom, wide-plank pine flooring, and sliding doors to the pantry.

“We spent our first night on Jan. 2, just a few weeks ago,” said Hill.  “I probably spend too much time looking for and finding all the mistakes we made, but overall, it is deeply satisfying to finally enjoy the fruits of our labor.”