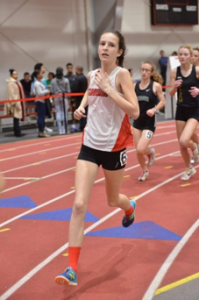 Despite only being a sophomore, Ellie Jeffrey is proving to be one of the most promising athletes at Godwin. She competes in indoor and outdoor track, cross country, and holds some of the fastest times for anyone her age, regardless of gender.

Jeffrey developed vascular necrosis in her sesamoid bone, meaning that the blood flow to a small bone in her foot was cut off and was slowly dying. This injury was caused by the constant impact on her foot due to constant running and genetics.

Jeffrey began to experience symptoms in Sept, but continued to run through the pain. She avoided seeking a professional physician because she did not realize the severity or rarity of the injury.

A foot injury for a runner is more than just an injury, especially for a sport that requires constant practice in order to maintain consistent times as well as improve on them.

Someone with her talent usually relies on competing in order to prove themselves to colleges.

“I was really disappointed that I wouldn’t be able to compete all year, but I decided to move forward, be positive, and do everything I can to come back stronger,” said Jeffrey.

She was able to stay positive after all she had been through, instead of letting herself lose hope.

Jeffrey underwent an operation to remove dead bone and repair tendons around her foot and is now waiting on the physical therapy rehabilitation process.

“There is a lot of strength, mobility, and balance work to do before I can run again,” said Jeffrey. The promising athlete won’t be able to run for eight to ten weeks and won’t be allowed to compete until cross country season.

Neither the injury nor the rehabilitation process will ruin her attitude as long as she keeps the right mindset. Jeffrey sees her situation as an experience she can learn from.

“The journey has taught me to make the most of negative situations and look at things with perspective,” said Jeffrey.

There’s no doubt that Jeffrey will be a valuable addition to Godwin athletics when she eventually makes a comeback for cross country season.