Day in the life of a Godwin wrestler 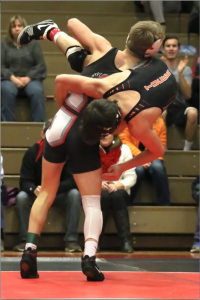 Wrestling is sport that requires athletes to watch their weight on a daily basis and condition in the offseason to make sure their bodies are in competitive shape. Senior Garrett Chandler is no stranger to this routine.

“My daily schedule before school is simple. I wake up, check my weight, eat breakfast, and leave for school,” said Chandler.

Chandler’s schedule in the afternoon becomes a little more complicated. He leaves after sixth, collects his wrestling gear at home, and returns to school for practice.

This schedule has been a staple of Chandler’s life for a while. He has been wrestling for 11 years and has competed at Godwin since his freshman year.

“After practice, I go home, check weight, and eat and drink as much as my weight allows,” said Chandler.

“In order to lose weight I drink a little bit of water, and any food that’s not salty which would hold water,” said Chandler.

Chandler also lifts in the offseason to gain weight and eats food with a lot of protein and healthy fats. Sometimes he also tries to sweat a little extra at practice in order to lose extra weight.

These techniques have worked well for Chandler. He holds a 106-26 record for wrestling in high school. Chandler’s biggest accomplishment in wrestling was reaching 100 wins, something that has been a goal of Chandler’s for a while.

Chandler’s little brother introduced him to wrestling and he has been hooked ever since.

In the offseason, Chandler practices at a club in Hanover. Despite Chandler’s impressive resume, wrestling at college is not something that intrigues him anymore.

“At first I was interested but I don’t think I will continue wrestling into college,” said Chandler.

Chandler credits head coach Bob Harris for part of his tremendous success on the mat.

“Our head coach Bob Harris has really helped me in the practice room and keep a good mindset which has helped me improve the most,” said Chandler.