Earlier this December, three of The Eagles’ Eyrie staff members, including myself, went around town to three different malls: Short Pump, Regency, and Stony Point. While at the malls, we stopped by to see each mall Santa, tell them what we wanted for Christmas, and review them. We reviewed them on three criteria: atmosphere (how well-decorated the Santa Zone was), beard feel (how good their beard was), and merry charisma (how charismatic they were).

At the Regency Mall we easily found Santa set up right in the middle of the mall, the perfect place for Santa. The decorations were quite lackluster. Except for a couple of decorated trees, it was just a big open area with a chair and a camera.

Once we got inside the Santa Zone we were immediately welcomed by Santa himself to come and sit with him. This chair was the biggest of all three, big enough for one of us to actually sit in it with him.

One of the biggest complaints I have about this Santa Zone is how far away the camera was. It was as if they wanted to show off the Christmas trees behind us more than they wanted to see us in the picture. I would not recommend Regency’s Santa if you have small child, as you may not be able to see them in the picture.

After the pictures were taken we each got free light-up Rudolph noses to wear. We were also asked if we wanted a picture in Santa’s sled. We got our picture in his sled and we went on our merry way. 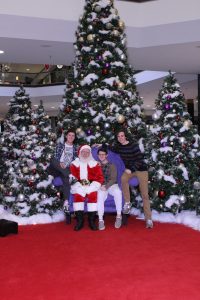 The Short Pump Santa was set up right near the main bathrooms which was pretty awkward. However, once we walked through the double doors into Santa’s little village we totally forgot all about the bathrooms.

All the little play sets for the kids were dressed up for Christmas and snow was everywhere. It really felt like we were in a winter wonderland.

We walked up to Santa and he was just as happy as he could be to see three high school seniors.

He made great conversation with us and gave us this great piece of life advice: “Do you know what the most important climate to control is?” he asked. We did not know, so he informed us that “it is important to control your own personal climate around you.”

He sat in a nice leather chair that was not quite big enough for all three of us. I do not recommend going here if you have a large family.

After we got our picture taken Santa gave each of us a peppermint lollipop and we went on our merry way. 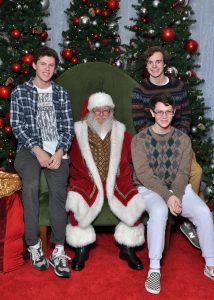 When we arrived at Stony Point Fashion Park we had no idea where Santa was. Luckily, they had these very convenient footprints on the ground that we followed to get us to Santa.

When we arrived at the Santa Zone, we were greeted by three merry carolers all dressed up and singing.

This Santa Zone was not very dressed up, but it was very organized. They had little tables to shop at for the parents and coloring stations to sit at while waiting to see Santa.

When we got to the front of the line we were greeted by the jolliest Santa we had seen all day. He was happy to see us and told us stories about his past visitors.

His chair was just the right size so we could all fit in the picture and feel included.

When it was time to take our picture, there was this wonderful woman behind the camera telling us jokes trying to get our best smiles out of us.

After the picture was taken, Santa gave us each sweet holiday bracelets to wear and we went on our merry way. 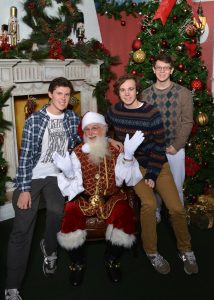