While most of world is still asleep, at 4:45 a.m. David-Christopher Hellams is already in the pool. 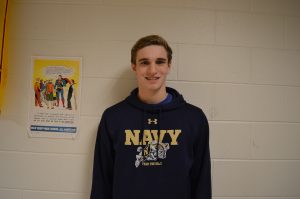 In his 14th year as a swimmer for Nova of Virginia Aquatics, (NOVA) Hellams swims anywhere from two to five hours every day.

As one of the top swimmers in the nation, one would expect the sport to have come naturally to him, but he had an unlikely start to his swimming career.

“When I was three years old, I was watching my brothers do swim lessons and I jumped in the pool to swim with them and couldn’t swim. The instructor had to rescue me, then my mom added me into the lessons,” said Hellams.

“My brothers already swam for NOVA and I looked up to them so I got my mom to sign me up too,” said Hellams.

At age five, he swam in his first competition meet.

“I remember being very nervous in front of the block but once I dove in, all the fear went away,” said Hellams.

After that first competition, the sport caught on quickly for Hellams. 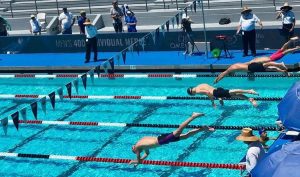 D.C. Hellams (second from front) dives off of the platform during a swim meet.
photo courtesy D.C. Hellams

“When I started swimming I didn’t think it would be something I would continue to do through high school and maybe into college,” said Hellams.

As he continued to swim, he climbed state ranks. At 14, he began to realize his potential.

“That year I won 4 events in states and decided it was something I really wanted to do and commit myself to,” said Hellams.

Now, Hellams devotes a large portion of his life to the sport. He wakes up before sunrise and swims for at least two hours everyday.

At 6:45 a.m. he heads home and eats breakfast to help with recovery and building muscle.

“My diet is pretty much the same everyday. I eat two or three biscuits, four eggs, a few slices of bacon, and a cup or two of hash browns for breakfast. After breakfast I finish any homework I have or sleep,” said Hellams.

In addition to his morning practice, Hellams has ‘doubles’ in which he swims and lifts weights in the afternoon. This occurs three times a week.

“On the days where I have doubles, I try to consistently eat granola bars and other foods high in carbs during school to makeup for the calories I burn and to make sure I still have energy for the afternoon practices,” said Hellams.

Those days, Hellams drives right from school to the pool for another two hour practice from 4:30-6:30 p.m.

“Surprisingly, weight lifting is pretty enjoyable because we always do something different. Our weight coach, Mike Wassmer, whose son Zach Wassmer also swims with us, has a ton of background in weight lifting so he always has different exercises for us to do,” said Hellams.

“When I get home from weights I eat dinner while working on homework. Dinner is usually pasta and some sort of meat. The focus surprisingly isn’t as much on protein as it is on consuming as many calories as you can throughout the day,” said Hellams.

According to Hellams, sleep is one of the most important parts of his conditioning.

“Sleep is one of the biggest factors in performance because of muscle growth and recovery. The more    sleep you get, the more you will get out of your workouts,” said Hellams.

Hellams makes sure that he will get at least seven hours of sleep each night, so he sets a strict bedtime of 8:30 p.m.

“Regardless of if my homework is done or not I always go to bed by 8:30 pm. Most of the time it is done, but if it isn’t I find time to finish it between morning practice and going to school,” said Hellams.

Swimming has taught Hellams lessons such as time management, responsibility, and how to take care of his body.

“The true effect of hard work is the biggest lesson I’ve learned from swimming. Especially when I started two-a-days, the correlation between results and how much time you dedicate to the sport was clear,” said Hellams.

“In the mile I got 9th as a 16 year old against mostly 18 year olds and it really made all the work and time I commit worth it,” said Hellams.

With the amount of time he spends in the pool, Hellams has become extremely close with the 30 other high schoolers involved in the same workout regimen as him.

“My teammates have become my closest friends and it is a bit easier to wake up that early and workout that much when it is with people you enjoy being around. We all know what it’s like to have to balance swimming with life outside of the pool and push each other to be better each day,” said Hellams.

As a junior in high school, Hellams hopes to continue swimming into his college years.

“A lot of Division I colleges have started to reach out to me about swimming for them and I have scheduled a few visits. There’s so much to learn about all the different programs and what they offer so I’m nowhere near making a decision on where I want to go,” said Hellams.

Although thinking about college is a lot of pressure for Hellams, he is grateful for the opportunities he has received.

“I am definitely excited to continue the college process and am super thankful for all of the friends, family and coaches who have helped me get to this position,” said Hellams.