Godwin gives back this season 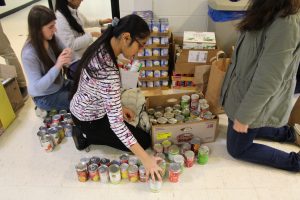 In 1942, Henrico County school teacher, Mittie McCraw Nelson asked that her students bring in canned food items for families in the area who needed them during the holidays. With time, this idea of hers evolved into what is now the Henrico Christmas Mother.

For many years now, the Henrico Christmas Mother has worked to provide for those less fortunate during the holiday season. This organization welcomes a variety of contributions such as collecting food items, warm clothes, books, and even sponsoring families.

“I felt this was a milestone moment in my life to help others,” said Harper.

Harper is a retired Henrico deputy county manager, so it is not the first time she has been involved in the Henrico community. 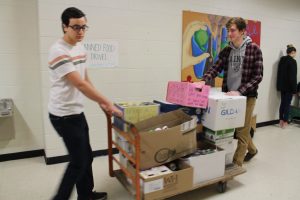 Students carry cans to the cafeteria to be delivered.

as we work together to share the spirit of giving,” said Harper.

Godwin participated in the Christmas Mother to help make its mission successful for another year. The BETA Club organized and worked on a school-wide can drive to contribute to the organization.

Godwin English teacher Miriam Ashworth has been the teacher sponsor for the BETA Club since 2000. Through her BETA Club sponsorship, she has experienced Christmas Mother can drives run by the club many times before.

“BETA Club is a service organization, but it is also academically based. You have to have a 3.0 [GPA] or better and then you also have to have a character recommendation,” said Ashworth. “Our goal is to serve our community, Godwin and larger.”

The can drive is not the only charity event that the BETA Club is involved in. In the past, they have donated to organizations such as animal shelters and Feed More.

“Our students are the ones who can pick charities or things we want to work toward,” said Ashworth.

“It’s how involved teachers and their students get,” said Ashworth. “We did really well last year.”

This school-wide can drive through BETA Club was run by the members and the officers of the club.

Senior Chris Xie is one of the Secretary officers for the BETA Club and worked alongside other officers and members of the club to make the can drive a success.

Senior Betty Judah, the president of the BETA Club, feels that the can drive has a great effect on those who benefit from it.

“I think that the canned food drive has a greater impact on our community than people realize. The food that students donate may be a simple purchase for them yet, for other families, it may be difficult to afford this time of year. This gesture, although simple, can be extremely helpful to many families in the Henrico community,” said Judah.

Godwin’s participation in the can drive greatly impacts Henrico families who receive food donations during the holiday season.

The promised incentive for the top can collecting classes was a free breakfast provided by the BETA Club. The breakfast goes to the top two classrooms. This year, it was awarded to math teacher, Dan Wallace’s class with 796 cans and to psychology teacher, Mark Seidenberg’s class with 252 cans.

“The provision of non perishable food and gift cards for perishable food for families with children, senior adults and disabled adults ranks as the most important reason to help,” said Harper.