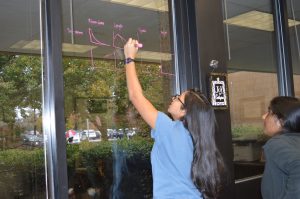 Juniors and seniors from the Todd Allen Phillips Center for Medical Sciences competed in the annual High School Mathematical Contest in Modeling (HiMCM), commonly shortened to Math Modeling, for the chance to compete against other top high school students from around the world from November 9 -19.

The competition takes place over the course of 11 days, during which students are placed into groups of four and asked to research and develop a solution to two real-world problems, ranging anywhere from tax rates to drone light-show cost optimization.

During the final two days, the students meet with their groups over the course of 36 hours to finalize their research, to construct a mathematical model, produce a 30-page research paper.

The competition can be strenuous, and students have to learn to work as a team effectively and efficiently.

Senior Abhijun Gupta said, “The math was the most difficult part, for sure. We spent over 10 hours working together on one optimization problem that was stuck because of two negatives.”

The problems are meant to simulate the applications of higher level mathematics and to give students first-hand, real world experience.

This year’s problems consisted of anything ranging from designing an energy efficient, smart thermostat system to determining the most efficient way to build a rollercoaster.

Senior Jerry Zhang hopes to pursue a career in mathematics and appreciated the opportunity to acquire direct experience.

“Topics like reducing crime rates and designing traffic patterns seem intimidating, but you’d be surprised at the progress you can make in just a handful of days. Now imagine where’d you get with a decades-long career,” said Zhang.

In the past, Godwin students have been successful in the competition, with certain groups receiving national recognition. The final placements are organized into six categories, and Godwin teams have placed within the top one percent in multiple years.

The sponsor of the event, center math teacher Miranda Watson finds the experience to be enriching for the students and sees value in encouraging higher level math usage when solving practical problems.

“Math is finally real to them, and I’ve had students come back to me and say that they are doing very similar problems in college. It’s also very valuable for them to work in a time pressured situation as a group,” said Watson.

According to sophomore Susanna Shepard, Math Modeling inspires competition within the specialty center, enveloping the lives of the students that compete in it. Overall, the students use the experience to grow and to learn, both as collaborators and as future mathematicians.

“I really enjoyed participating. It taught me so much and it was really rewarding to read over our final paper,” said Shepard.