Our climate depends on us, and our lives depend on the climate 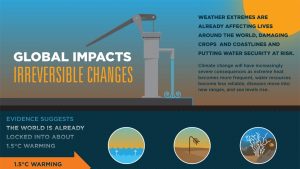 When we think of the inevitable tearing apart of our universe, or even the inevitable explosion of our galaxy’s sun, as one might every so often, they probably don’t foresee these as serious threats.

Surely the human race is in no immediate danger; the sun still has at least 7.6 billion years before it explodes and begins to consume the galaxy in an intergalactic firestorm before settling into a deep freeze, and the universe has even longer than that. However, to fear something so distant seems irrational, no matter its irreversibly devastating nature.

For a long time, this is how we have viewed changes to our planet’s climate. Even though any logical person can see that dumping harmful chemicals into the ocean or pumping a pollutive cocktail of carbon dioxide, methane, and nitrous oxide into the atmosphere will have a harmful effect, we have continued to do so for nearly 200 years.

Even though we have known about climate change for so long, it has only become a pressing issue more recently. It has always been seen as something that can be pushed aside as a younger generation’s problem.

The time has come for our generation to suffer the consequences of the actions, or lack thereof, of our parents and grandparents. Kicking the can down the road is no longer a viable option.

According to a recent study released by the United Nations, though any living organism releases greenhouse gases as a byproduct of life, the rate at which humans have released them due to industrialization has had an unprecedented impact on everything from possible extreme droughts followed by intense and damaging storms, to a rise in sea level that will inundate coastal cities with water.

If something does not change soon, the release of greenhouse gases will raise global temperatures to disastrous levels. Even so, the UN also estimates that, though many impacts of climate change are permanent, other impacts, such as the continued flooding and sinking of many coastal cities or long-term droughts and famine, are preventable.

Climate scientists from international research institutions including Yale and Oxford have concluded that so long as the temperature change is kept below 1.5 degrees Celsius, we are safe from extinction. Meeting this goal will be difficult, and doing so requires drastic changes in the foundation of society, all within an estimated 12 years.

These changes include things such as reducing greenhouse gas emissions to about 60 to 80 percent of current rates, offering incentives for greener forms of energy and transportation, and passing legislation against the use of dangerous non-renewable resources or non-biodegradable plastics.

Though action is necessary to prevent the suffering and death of millions, President Donald Trump recently stated, “ I agree the climate changes, but it goes back and forth.” When presented with evidence to the contrary, he explained that “My uncle was a great professor at MIT for many years, Dr. John Trump, and I didn’t talk to him about this particular subject, but I have a natural instinct for science.”

Trump’s statement represents a blatant and narcissistic ignorance of facts. You would think that this would anger even his core constituency. If anything, Trump’s removal of legislature surrounding environmental protection and his constant attacking and discrediting of 95 percent of the scientific community- the percentage that is in agreement about climate change’s existence and its impacts on modern society-  have done nothing but garner him support within his base.

Trump also propagates the common misconception that these changes will hinder economic growth. On the contrary, new fields of research, development, and manufacturing spawn from new types of energy, all of which stimulate the economy.

The assertion to the contrary only serves as a lie intended to cause polarization and politicize an issue rather than address it due to deeply rooted personal economic ties in oil and natural gas.

Supporting a greener society isn’t about being a Democrat or Republican, it is about having the common sense to choose the best of the three options presented to us: mitigation, adaptation, or deterioration. The end of humanity is inevitable- the sun’s looking at its watch as we speak- but the changes we make today are crucial to giving us a tomorrow and giving our kids a home that is not a dystopia.