Integrity: Is it gone in politics? 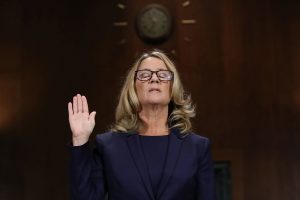 The nomination of Brett Kavanaugh to the Supreme Court, along with many other controversial politicians in the era of Donald Trump, tests the authenticity of American politics.

I will be the first to admit I am not a political analyst constantly glued to the news, but when the name Kavanagh constantly makes headlines, I find it difficult not to pay attention.

When first researching Kavanaugh, his past political experience, education, and so on, I was impressed. Graduating from Yale law school and many years on the U.S. Court of Appeals is definitely something to flaunt.

I stopped in my tracks when I learned of the accusations of sexual misconduct.

Political trust, defined as the public’s confidence in political institutions and responsible for maintaining political legitimacy, is relevant now more than ever.

This runs deeper than politicians stances on key issues. In the wake of so many sexual misconduct charges in 2018 in politics and beyond, how can one’s credibility and political career survive these accusations?

With the rise of the “Me Too” movement in late 2017, I am even more taken back by the leniency Kavanaugh has been allowed. Although prevention of sexual misconduct has always been a problem, positive strides were finally being made to reduce women’s fear to speak up if they were victim to sexual assault of any kind.

Before even touching politics, the Kavanaugh nomination has hurt the efforts of the movement simply because of the ignorance shown toward the woman who spoke up. Every sexual misconduct accusation not properly acknowledged only further discredits the women who spoke up in the first place.

While I am one who believes everyone is innocent until proven guilty, I can’t help but raise and eyebrow in regards to how Kavanaugh and those defending him responded to the accusations.

The most notable public defendant of Kavanaugh was Republican Gina Sosa, who defended Kavanaugh in a CNN interview.

“We’re talking about a 17-year-old boy in high school with testosterone running high. Tell me what boy hasn’t done this in high school, please,” said Sosa.

She is referencing Christine Blasey Ford’s letter accusing Kavanaugh of pinning her to a bed and attempting to take her clothes off at a high school party.

As a 17-year-old high school boy myself, I was personally frustrated by this statement in particular. She is making an incredibly broad generalization that slanders the perspective people have on males in high school.

In short, I would never forget my morals and commit an atrocity like that. Although many high school students make mistakes, this one for Kavanaugh is nothing to overlook.

I am concerned not only for the integrity of our politicians as a whole but for the public perspective on sexual misconduct of any kind. In no way should can this type of behavior be portrayed as typical of high school males.

Not only is this statement cause for concern as it paints a negative image onto the ideals of the Republican party, but it threatens the overall safety of women. In an era where movements, such as “Me Too”, are a priority, the sheer ignorance of this behavior is a step backwards.

Kavanaugh only worsens his integrity when discussing his views on executive power. I am most concerned by his argument that politicians should be shielded from criminal investigations and civil lawsuits.

Keep in mind who appointed Kavanaugh in the first place. President Donald Trump has been accused of sexual misconduct by over 20 women himself, and the Trump administration repeatedly waived any investigations of the allegations.

This immediately gives the White House and high level politics in general a very bad look. When one leader under fire attempts to appoint another leader under fire for similar wrongdoings, it is hard not to question what is really going on behind the scenes.

This one-two punch of conservative cover up does nothing but skew the public view of high level politics. How are we supposed to trust these men to make decisions for the greater public when they possess these beliefs?

Brett Kavanaugh is now a Justice of the Supreme Court, one of the highest positions in American politics. It is concerning to me that someone who does not hold themselves to a high moral standard has to make decisions that impact the entire country.

The issue of loss of integrity comes back into play here. The Supreme Court is not a one man show. One questionable judge can slander all of the other names on the court.

Only time will tell as more and more women speak out about being sexually assaulted and trust is continually lost in American politics.