Godwin freshman runs her own business 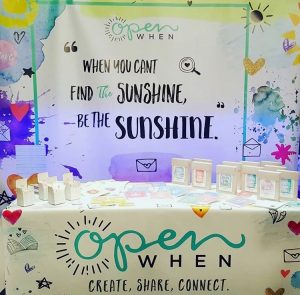 Balancing schoolwork and a part-time job can be challenging, requiring flexibility, communication, and time management.

Freshman Bella Geary has learned to tackle these challenges through running her own business.

Geary owns and operates Open When, a personalized letter company. The company sells pre-made packages of customizable cards and letters tailored to different life events, such as birthdays, weddings, and holidays.

Each package contains 20 cards: 15 topic cards, five blank cards, and 20 envelopes, all of which are customizable by the customer.

According to Geary, the company is built on her family ties.

“My dad passed away when I was young, so my family and I got super close. My brother was leaving for college at Virginia Tech and I needed to make sure he still felt connected when he was away,” said Geary.

Geary made her brother a homemade box filled with handwritten letters from her, and she decided to make a business out of it.

“My mom is big in marketing so she told her friends in the industry about it. After that, there were a lot of meetings to see if the vision would work. Everyone involved kind of just made it come together,” said Geary.

Geary takes advantage of social media, including the company website (www.openwhen.com), Instagram (@openinspiration), and Twitter (@openwhennotes). Geary uses the social media to reach out to her followers to announce news and alerts, including new packages and special deals.

Since starting the business in fifth grade, Geary has sold more than 1,000 packages.

Geary donates 15 percent of the money raised to the Cameron K. Gallagher Foundation, a non-profit that focuses on the mental health of teens.

“I decided to donate to CGF because suicide and depression is a big issue right now,” said Geary. 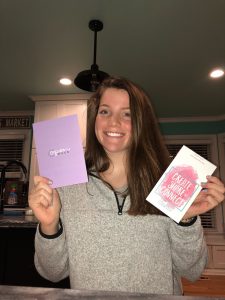 photo courtesy Bella Geary         One of Geary’s stands, including many of her packages.

According to the Open When website, their mission is “to build a community that spreads happiness and support to all and to tell our loved ones how much they mean to us every day.”

The success of Open When has led Geary to television gigs, including the ABC talk show “Fab Life” in 2015.

“The talk show experience was really exciting. It was weird being around people who admired me in that way. It changed how I felt about my own company. Before the show, I never saw the business as a big thing that was impacting people. Being on national television changed that for me,” said Geary.

“Whenever I do news segments or talk shows, we have a lot of orders come in. We get a couple more followers too, but people reach out to say that they like the company,” said Geary.

“My personal favorite is the Military Package because that’s how the whole company started,” said Geary.

“[Balancing school and the company] is easier than it seems, I just make sure I’m managing my time correctly,” said Geary.

According to Geary, the most difficult part of running her own business is keeping up with the orders.

“We ship hundreds of packages all over the world, so it can get confusing sometimes. My mom helps me with organization and finances, and my older brothers used to help as well,” said Geary.

After an order comes in, Geary puts together a box and puts in the cards and a few extra gifts, depending on the size of the order and the occasion.

“Owning a company takes a lot of hard work, but the impact it has on people makes me feel really good,” said Geary.

“From the experience, I’ve learned to be more independent, and I feel like it’s made me a better person in general,” said Geary.

In the future, Geary hopes to expand the company to a mobile app in addition to their website.

“We want the company as a whole to have a better influence on individuals,” said Geary.