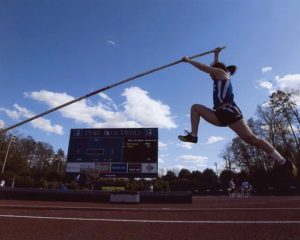 In 2007, hard work in the classroom, participation in clubs, and dedication to athletics showed their worth for former Godwin student, and three time state champion, Anne Marie Gordon. That combination of involvement and allegiance to Godwin resulted on her being crowned Godwin’s Most Valuable Eagle (MVE).

Gordon looks back fondly at her experiences at Godwin.

“I had a very positive experience at Godwin. I didn’t know what my career path would be during high school, but I learned a lot about what I like (and don’t like) in school, which helped me choose classes during college and eventually find my passions,” said Gordon.

Following high school, Gordon went on to study at Duke University where she double majored in Public Policy and Spanish while minoring in Education.

After college, she spent four years teaching middle and high school English in Santo Domingo in the Dominican Republic.

After her time in Santo Domingo, Gordon pursued graduate school at Stanford University, where she received a joint Master’s Degree in Education and Public Policy in 2017.

She now lives in Oakland, California and works in the Budget Office of the San Francisco Unified School District helping principals make decisions about how they want to organize and run their schools.

“I chose a career in education policy because over the course of my own education, I came to believe that education is one of the most meaningful ways to change lives for both individuals and for society as a whole,” said Gordon.

While winning MVE helped shape Gordon, she does not see it as the culmination of her time at Godwin. To this day she takes pride in the fact that she won, but it was her experiences in clubs and on teams that mattered to her.

Gordon’s time as an athlete taught her many skills: time management, resilience, discipline, and has especially improved her work ethic.

“I learned how to set goals and outline the steps to achieve them, as well as hold myself accountable to my commitments,” said Gordon.

Athletics used to be something that Gordon only focused on during her free time in high school and college, but since then Gordon has realized that being an athlete has been an essential aspect of her identity. Her time pole-vaulting tremendously impacted her life, and her character.

Since leaving Godwin, Gordon has lived in Durham, NC for college, then Santo Domingo, she then moved to California to attend graduate school, and now resides in Oakland, CA. However, her mother still lives in the Godwin area, and her brother who graduated from Godwin in 2009, now lives in New Orleans after studying Economics at the University of Virginia.

After becoming the MVE in 2007, Gordon attended two of the most prestigious schools in the nation, she has traveled the world due to her work, and she has made a career out of her passion. Yet, after all those achievements she still cherishes and remembers her time and experiences at Godwin.

“Winning MVE certainly shaped me. However, I don’t see it as validation of my time at Godwin. I worked hard and participated in clubs and on teams that mattered to me, and those experiences shaped who I am in ways that an award or recognition can’t,” said Gordon.