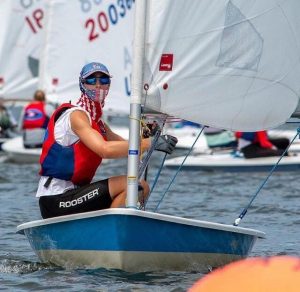 While many athletes participate in sports like football, basketball, baseball, and soccer, Godwin senior Ian Street is involved in sailing as an extracurricular.

Sailing first became a part of Street’s life at the age of six years old.

“My grandfather was a big sailor, and both my parents sailed,” said Street.

Street participates in a type of sailing called fleet racing.  Fleet racing is when an individual sails alone in a fleet, which is different from team racing where one sails with a team.

“It’s a lot like track where you race individually but you train as a team,” said Street.

Street currently sails for Fishing Bay Yacht Club, which is a club team that sails mostly around the Chesapeake Bay. Street takes pride in the sport.

“The coach I had this summer was originally from Peru, but he had been working in Australia for a long time and we were really lucky and got him to come over and coach us,” said Street.

A couple of years ago, Street was a member of the Youth U.S.A. Team, and had the opportunity to sail in Belgium

Street has traveled to many places for competition, such as Belgium, Maine, Rhode Island, Massachusetts, Florida, and all around the Chesapeake Bay.

“My favorite place [to sail] would be Belgium because I was able to represent Team U.S.A,” said Street.  “It was also cool to be in a French speaking country.  It helped put my French class into a real world context.”

Street finds himself dedicating a lot of his time to sailing.

“During the summer, I practice every day, except Sunday, from nine to four,” said Street.

Last year, Street finished third in the Chesapeake Bay Region for the Laser division, which is the type of boat he uses to sail. This year he improved and scored second place in the same event.

As a student in the specialty center here at Godwin, Street has received inspiration for his research projects from his sailing.

“Last year, I grew pathogenic bacteria on ocean plastic because I hate seeing plastic in the ocean,” said Street.

Street’s enjoyment of sailing stems from his love of the ocean.

“I sail alone in the boat, so I like the isolation and the time to think,” said Street. “I love the water, it’s just calming.”

Street believes sailing is a one-of-a-kind-experience.

“I would say that sailing is a very specialized skill, a harmony of fitness, technique, and observation,” said Street.

Upon graduation from high school, Street hopes to continue his sailing career in college and well into the future.

“Basically everything for me relates back to sailing,” said Street. “It kind of defines who I am.”