Godwin Senior gives back to community 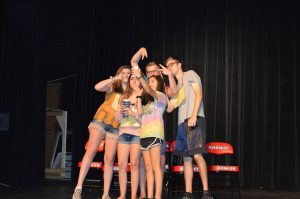 L to r: senior Sarah Welch, junior Lydia Logsdon, senior Brittany Alley, sophomore Mason Jett, and senior Davis West are amongst the crew
members that have been practicing all summer to make sure their production was a success.

The Godwin Theatre Program has been an integral part of the Godwin Community for a number of years.
It has positively affected the lives of students, teachers, parents, and those both within and outside the
Godwin community.

Godwin senior Sarah Welch is one of the numerous students whose high school career has been shaped by Godwin theatre, and she is eager to give back.

Welch has participated in Godwin plays and musicals throughout her high school years, including The Musical Comedy Murders of 1940, Fools, The Addams Family, The Drowsy Chaperone, and more.

She credits her involvement in the program to both her close friendships and her growing passion for music and theatre.

“In every production I have been involved in, I have gotten closer to these people. You learn so much about one another and we are all so closely knit,” said Welch.

As a senior this year, Welch feels it is necessary to give back to the program that means so much to her.
“I see this as my senior project for Godwin Theatre. I really want to do something to not only give back but to also inspire more people to join as I and many other seniors in the program are departing at the end of this year,” said Welch.

For her project, Welch chose to take on the challenge of producing and directing a bonus play that will take place in 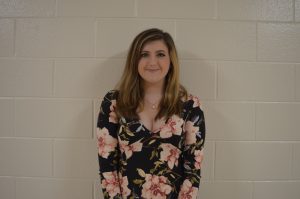 the second week of September.

“I first thought of the idea in November and approached principal Leigh Dunavant and theatre teacher and director of Godwin productions Todd Coolidge over winter break with the idea. They both loved it and the project took off from there,” said Welch.

The play is The 25th Annual Putnam County Spelling Bee. It will show on September 14 and 15. The production is a nine-person cast and is described by Welch as a stand-up comedy with improvisation scattered intermittently throughout the production.

“I loved this play from the moment I first looked into it. It is absolutely hilarious and guarantees a laugh. There is quite a bit of improv, which is different from a lot of our productions, and there is, of course, some audience participation,” said Welch.

Welch had to buy rights to the play as well as the script, cast the play, schedule rehearsals, and the space to do so, handle the building of a set and run the project as a whole.

Both the cast, Welch, and her mentors have given a large amount of time to the completion of this project thus far, showing up at Godwin at 9:30 am four days a week to rehearse and perfect the production over the summer.

“It was definitely equally, or maybe even more, of a challenge as I expected. It has taken huge amounts of persistence, concentration, and dedication from not only my part but from everyone involved. I could
not be more impressed with everyone’s dedication to this project,” said Welch.

Throughout the project, Welch’s appreciation for the theatre has grown exponentially.

“I know that by doing this project I would have an effect on other people, but I had no idea how much it would affect me personally,” said Welch.

In previous productions, Welch had been focusing on a single aspect of a play or musical, most commonly the acting element. However, this experience has exposed her to the myriad of other equally important aspects of a theatre production.

“I never knew how many other things were going on beyond the visible stage. The tech, lights, sound, music, set changes, etc. This experience has enabled me to see a play as the whole production that
it is, not simply the one element I see on stage,” said Welch.

“I chose this charity because the cause is very near to my heart. I think our veterans deserve more recognition for the amazing work that they do, both on and off the battlefield. My great-grandfather was a World War Two hero, my grandfather served in Vietnam, and I had an uncle die while serving the country. The military is a part of my family, and I feel blessed to have the opportunity to support them,”
said Welch.

Welch is excited to see what impact the play will have on the student body and hopes that it will bring laughs and smiles to students, parents, and staff amongst the often stressful back to school season.

Welch hopes that when students see that a high school senior can produce and direct a successful play, they will not only be inspired to try out and join Godwin theatre but to pursue their own
aspirations as well.

“This venture has taught me so much, I can’t put it all into words. I hope that the final product does not only bring smiles to every face in the audience, but confidence in themselves to go after their own
goals,” said Welch.