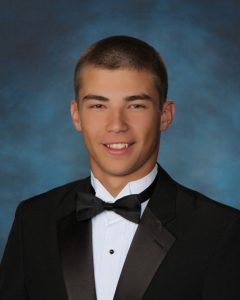 On Monday, June 4, Godwin senior Corey O’Shea was named runner-up of the Richmond Times-Dispatch Scholar-Athlete of the Year award.

O’Shea, as well as the other runner-up, Madison Jiranek, from St. Catherine’s, was awarded a $5,000 scholarship.

“It was such an honor to be nominated with such a great group of scholar-athletes. I really didn’t expect to be anywhere near the top, but it was such an awesome surprise.”

A multi-sport athlete, O’Shea played baseball, basketball, and volleyball for Godwin, and was captain of all three teams.

According to Godwin Basketball coach Hunter Thomas, O’Shea was “a great vocal leader for us this year. As a captain, he held himself and others responsible for their jobs on the team. He was willing to do whatever it took to help the team, even if that meant sacrificing points for himself.”

O’Shea will attend the Massachusetts Institute of Technology (MIT) and will major in either Applied Mathematics or Computer Science.

He will play baseball but also hopes to continue playing basketball and volleyball either through intramurals or recreationally.

Additionally, O’Shea was also the 2017-18 valedictorian and earned a 4.66 GPA for his high school career, but according to O’Shea, this was not always easy for him.

“It’s been very difficult for me (maintaining goals and GPA) at times, but with good time management skills and making a few sacrifices when necessary, you can successfully balance athletics and academics if it is that important to you.”