There goes the Neighborhood

Gentrification takes hold of some American neighborhoods, strangling its residents 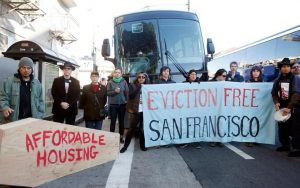 A few years ago, I went back home to the Bay Area. I was excited to visit; I was going to see a lot of my old friends, go to my favorite restaurants, and spend time with family I hadn’t seen in awhile. But when I got back, the vibe was different. It was off.

More and more people were living on the streets.

The restaurants run by hard-working families that I had frequented as a child were gone. In their place were coffee shops and juice bars with prices too high. Previously vacant buildings were now filled with high-end, expensive lofts that no one I knew could afford.

But what really made me feel like a foreigner in my own neighborhood was the fact that my aunt didn’t live there anymore.

When I thought of home, I thought of my aunt and I walking down the street hand-in-hand. I thought about her holding my hand on the BART (the Bay Area’s version of the MTA) for an “aunty and Asha day”.

I thought about her going on and on about how she loved living there. How it had given her bits and pieces of her identity.

The word gentrification was coined by British sociologist Ruth Glass in a 1964 essay about postwar London. As times began to change, she saw a more modernized and affluent London, but this came with certain ills.

She found that commutes were longer and traffic was worse. She began to notice more specified middle-class jobs. In return, this caused menial jobs to become scarce. The “working class part of town” became invaded by the middle class.

The newcomers began buying up the “shabby, modest mews and cottages” and turning them into “elegant, expensive residences.”

Once this process of gentrification starts in a district, Glass writes, “it goes on rapidly until all or most working-class occupiers are displaced, and the whole social character is changed”.

Gentrification is characterized by several changes.

The first is a change in demographics. There begins to be a noticeable trend of increase in median income and a decline in the proportion of racial minorities.

There is also a reduction of household size, as low-income families are replaced by young singles and couples.

The second change is in the neighborhood’s real estate markets. Large increases and home prices are observed, as well as increases in the number of evictions, conversion of rental units to ownership, and development of luxury housing.

The third is a change in land use. A decline in industrial use and an increase in office or multimedia use is seen as the development of live-work “lofts” and high-end housing grows.

The last change is sometimes felt rather than seen. As new ideas about what is desirable and attractive take route, the culture and character that originally drew newcomers to the neighborhood begin to disintegrate.

America’s renewed interest in city life has put a premium on urban neighborhoods. If people are flocking to new jobs in a region where housing is scarce, pressure builds on areas once considered undesirable.

Landlords raise the rents of the original tenants to a price that some are unable to pay. As they fall behind on their payments, they begin to face eviction notices.

Eventually, being unable to pay, residents are forced to move from an environment that they spent their whole life in for someone who is looking for a trendy, new place to live.

Gentrification tends to occur in districts with particular qualities that make them desirable and ripe for change.

The convenience, diversity, and vitality of urban neighborhoods are major draws, along with the availability of cheap housing, especially if the buildings are distinctive and appealing.

Gentrification works by accretion, “gathering momentum like a snowball”. Few people are willing to move to an unfamiliar neighborhood across class and racial lines.

However, as newcomers become more prevalent, more people are willing to make the move. As word travels that an attractive neighborhood has been “discovered,”  the pace of change is accelerated rapidly.

Recently, the city of Richmond, similar to the Bay Area has been going through a similar change in demographics as an influx of newcomers is on the rise.

Gentrification in the City of Richmond dates back to segregation. As public schools were forced to integrate, white citizens who lived in the city began to move away and establish their own communities, thus eliminating the possibility of integrated schools.

As white individuals moved out to the suburbs using Federal Housing Administration loans, the minority and low-income population remained because they were not able to use these loans due to redlining.

Redling specifically kept these neighborhoods in distress, as they were defined as areas where banks and insurers would not write loans for home ownership. This practice left minority and low-income households with deteriorating neighborhoods in the cities.

Communities that were once thriving were now neighborhoods of income disparities and lack of present and future investment.

However, as time progressed many individuals started preferring to live in neighborhoods that were closer to work and other cultural amenities; this movement is defined as the “back to the city movement”.

Through this concept, integration of neighborhoods began to take off and middle-class residents were now becoming attracted to living amongst low-income houses.

Due to their desire to re-integrate, reinvestment began in distressed communities such as Church Hill, homes in the area were bought at an affordable price and re-modeled at a higher quality.

This migration of new residents to urban neighborhoods impacts both the supply of housing affordability for low-income households and the social and cultural environments of their public spaces and community institutions.

When new residents move in with the ability to buy the newly developed housing, low-income residents suffer, Gentrification brings in goods and services, but in doing so, it also brings an increase in rental prices.

When an influx of new, middle-class residents move into a community, there is additionally a cultural shift in the area, causing long-term residents to not only be pushed out of their homes, but in addition to losing the culture their neighborhood was once known for.

As the culture begins to disintegrate, so does the feeling of belonging in one’s own neighborhood.

In some cases, neighborhoods that experience gentrification can become “victims to their own success”.

When success comes to a neighborhood, it does not always come to established residents, and the displacement of that community is perhaps gentrification’s most troubling effect.

More and more families face eviction with no place to go. More and more people find themselves on the street because all of the sudden, the rent went up.

More and more, lifetime residents of communities are forcibly removed as upper-class people move there, looking for something “new” and hip.

As I think back to my old neighborhood, I feel a twinge of sadness knowing that a lot of people that have lived there their whole lives can no longer afford to live there.

I think of family homes becoming vacant as the family who once added vibrancy and life to their home now have to scramble for a roof over the heads.

No one should be booted from their only home that they know simply because times are changing.

When I think of home, I think about old times with my aunt enjoying the Bay Area and everything it had to offer us. But my aunt doesn’t live there anymore because the cost of living is on the rise due to gentrification.

What was once a culture of neighborhood solidarity on everyone’s block has changed as lifetime residents are forced from their homes to make room for higher paying residents.

Home is not the same. Home has changed and it’s difficult to know if it’s for the better or for the worst.