Puerto Ricans are left to fend for themselves, even in the wake of Maria 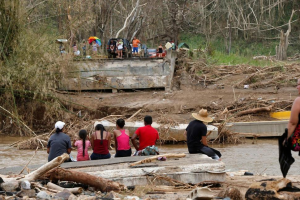 It is an island abounding in beauty, with its rich history and a culture that never fails to disappoint. You will never leave forgetting the rejuvenating beat of the salsa and bomba music we are proud of. When you leave, you are never left empty-handed. Yet, in the midst of this abounding beauty, empty-handed cannot begin to depict the images of the struggle it is to live in Puerto Rico.

The problems do not just begin with Hurricane Maria and our government’s meager response to assist its own people. In order to fully comprehend the crisis that is currently ravaging the island, we would have to ask one simple question: What is Puerto Rico to us?

It is no surprise that many still do not understand the relationship Puerto Rico has with the United States given the inadequate amount of material students learn about the island.

While some states have standards that require a lesson on the history of Puerto Rico and its relationship to the mainland, many states skim through this part of American history in regards to the way its citizens are treated.

Many people to this day have no knowledge on how Puerto Ricans are our citizens, yet their rights are cut short. Although they were granted citizenship in 1917, the Constitution does not officially recognize them as our own.

One of those vital rights stripped from Puerto Ricans is their right to partake in presidential elections. While Washington may be putting their two cents in on critical matters for the island, Puerto Ricans cannot, therefore putting them at risk of expecting the unexpected.

The only representative in Congress, Resident Commissioner Jennifer González, cannot  vote – therefore devaluing their role in Washington. While she may be able to address the island’s current dilemma, she can expect Congress to take little or no action.

The island is deprived of fundamental rights to handle its debt crisis, which has been devastating the island for decades, tightening the island’s budget even more. Since they are banned from declaring bankruptcy, Puerto Rico’s debt piles up and creates an arduous situation for our own citizens.

In addition to these complications, the infamous Jones Act continues to put Puerto Ricans at a disadvantage. Just like every living human being on this planet, Puerto Ricans depend on food and other resources to live. However, Puerto Rico’s case is unique. Any shipment coming into the island must be sent to the mainland first, then be shipped to the island by U.S. vessels. Best of all? The cost is thrown on the island, essentially exacerbating the deficit.

Through all of the antiquated regulations the island faces, Puerto Ricans continue to be joyous, optimistic people who can distract themselves from the immoral treatment of their land.

In the days after the storm, we can remember seeing nonstop coverage of the catastrophe from the media and the mayor of San Juan desperately pleading for more aid while saying how Puerto Ricans were dying. We remember the stories of desperate families attempting to get in touch with their loved ones, even though there had been little or no hope of achieving so.

My family knows what that feeling was like, as my aunt and her family were stranded on the island. I hope to never relive the moment when I received the first call from her after five days, hopelessly crying.

I remember the chaos at home and hearing my grandmother praying incessantly, shedding helpless tears for her daughter each time she was done. However, their “survival” story is a laughing matter for those who live on the island to this day in darkness.

It has been an unfathomable amount of time since the island went dark, and while 97 percent of Puerto Ricans may have power back in their homes, all made possible by the island’s bankrupt power company, there are still customers without power, and these customers most likely have been without power since Hurricane Irma struck the island last August.

This is still the case – eight months after Maria devastated the island.

The Trump administration’s baffling response to the disaster not only showed the negligence of his staff’s decisions, but the lack of empathy on their behalf as well. When visiting a relief center in Guaynabo, a suburb of San Juan, the President threw paper towels at devastated citizens, while making it apparent to the media that his visit to the island lacked purpose and that it was essentially to gain attention.

Just as quick as he is able to tweet in a castigating manner, Trump was quickly able to defend his actions, saying the paper towels were “beautiful, soft towels” that were “very good.”

I guess we can safely assume that paper towels cannot wipe up every mess made in the kitchen, but to Trump, they had a great chance of doing so and lessening the apparent burden it was to send aid to the ravaged island.

Eight months later, the peak of the crisis is now past us, and the media has now faded it out to appeal to an audience that is somehow still interested in being informed every ten minutes about Stormy Daniels or Michael Cohen.

It seems that rather than put focus on a humanitarian crisis that continues to loom over our own citizens, what sounds more interesting is a subject that is more entertaining than realistic.

Since the media is such a crucial influence on many of our views, if we simply had more coverage on the crisis, there would be a higher level of concern for Puerto Rico.

However, because it is the opposite, we must realize the impact we need to make as a country to successfully help our citizens.

We cannot forget that Puerto Ricans, while stripped of certain rights, are just as American as we claim to be. They have fought for our nation and have contributed to the successful values this nation claims to embrace, but they are given hand-me-downs in terms of assistance and emotional support that was desperately needed in the time of the disaster.

Now that summer will be in full swing soon, Puerto Rico will once again be swarmed with mainland tourists and many others. Let’s try not to forget the needs of our own citizens and their pleas for equality, as they joyously continue with the rhythm of their lives.