Finding faith: a pilgrimage to Israel 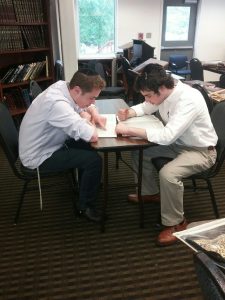 Kindergarten to senior year, two or four-year college, full-time job – this is the typical student schedule. Traditional education begins around the age of six, continuing until you are 22-years-old and sometimes is followed by more and more years of study.

In recent years, students have been breaking up this traditional educational path with gap years and study abroad programs.

This summer, senior Jacob Lehman is leaving his home in Richmond and beginning his gap year in Modi’in, Israel, a city approximately 20 minutes outside of Jerusalem.

“It’s pretty common in Orthodox Jewish communities to [take a gap year]. We strongly value Jewish education as well as secular education. It’s important to take a year or two and completely dedicate it to Jewish studies,” said Lehman.

“[The classes] are almost like having a one-on-one. I feel like I can get the most knowledge out of that. I was also pretty close with [Rabbi Chaim Ozer Chait] when he was here in Richmond,” said Lehman.

The classes include a full day of Jewish and Torah studies, along with trips around Israel to common sights of ancient and Jewish relics. This will be Lehman’s first time traveling to Israel, and he will be staying in an apartment with his friend Yehuda Sherman, a senior at Yeshiva of Virginia who will also be going on the trip.

Lehman hopes to travel around Israel, including Jerusalem, the Wailing Wall, and other famous religious sites.

As Lehman travels through Israel, safety is a slight concern. However he is enthusiastic for the experience regardless.

“It’s an aspiration to go to the Temple Mount, but it is kind of dangerous up there. I know people who go up there, but it is just not safe,” said Lehman.

The Palestinian and Israeli conflict has been occurring for over 100 years with both countries arguing that they own the land along the Gaza Strip and the Israeli territory.

The tension most recently escalated when the U.S recognized Jerusalem as the capital of Israel and moved its embassy to Jerusalem on May 14. Protests in Gaza against the embassy resulted in 2,700 Palestinians shot with 60 dead, and tensions have remained since.

Lehman plans to play it by ear, remain cautious, and listen to the advice of his school where to go and not to go while staying in Israel.

Following his gap year, Lehman has already been accepted to Yeshiva University in New York City. Approximately 90 percent of students who attend Yeshiva University take a gap year in order to devote themselves to a study outside of traditional schooling.

“The trip could definitely shape my career path, I’m currently most interested in finance, law, and Torah studies,” said Lehman.

Lehman was not brought up in a particularly religious home, as his parents practice what is known as Conservative Judaism.

Lehman attended a Jewish school from kindergarten to eighth grade, which inspired him to travel to Israel, and he hopes that his trip will help in his study of Orthodox Judaism.

“My main goal of the trip is to gain as much Torah knowledge as possible to make the right decisions based on that. I would also like to go to T’Zfat, an ancient Jewish city filled Jewish mystics. We still hold traditionalist study pretty high up there, and I would like to see the history behind it,” said Lehman.

Jewish mysticism is an ancient Jewish tradition based on an esoteric or abstract interpretation of the Old Testament.

Lehman will be leaving on Aug. 12 and will take a 16 hour flight from New York to Israel.

“Jews pray three times a day, so on the flight they designate a pray corner, which is really interesting,” said Lehman.

Israel is the only Jewish majority state, and Lehman looks forward to visiting a country where more than half of the state practices Judaism.

“You live in the United States- in Richmond, Virginia- and there is only around 100 families who practice Orthodox Judaism here in Richmond. In Israel, everyone is wearing a Kippah. I’m excited to get a different perspective,” said Lehman.

Lehman is excited to discover Israel and learn more about his faith during the year to come.

“I think it is an important opportunity for anyone to take a year of your life and just dedicate it to something. I think this will be important for me, and I’m super excited,” said Lehman.