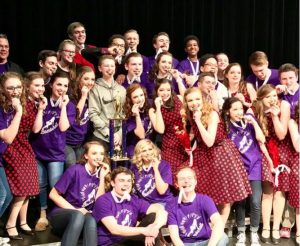 Debut with their Grand Champion Trophy and medals at the Hanover Competition.
photo courtesy Thomas Hodges

Debut competed against four schools in the Small Division, which consists of choirs with 20-30 members, and won the title of Grand Champions, also earning additional trophies for ‘Best Vocals’, ‘Best Show Design’, and ‘Best Choreography’ in their division.

“[When we won], I jumped up and down screaming, and I got to share the news with all my friends,” said sophomore Thomas Hodges.

Debut’s theme this year was “Bombshell,” based off of Marilyn Monroe’s acting career.  Senior Hannah Welch is portraying Monroe, and according to Godwin choral director David Clatterbuck, “is doing a great job.”

“It was an unforgettable experience performing as Marilyn, and the greatest honor to portray such a renowned, timeless female icon,” said Welch.

Some of the songs in the set include ‘Shining Star’, ‘Material Girl’, ‘Take On Me’, and ‘Love Runs Out’.

“I tried to tie in songs that were appropriate to the theme, that also had a variety of styles. I tried to mix in both classic and newer songs,” said Clatterbuck.

At the Festival of Choirs, juniors Adelaide O’Connor and Adam Gray won individual Showmanship Awards in addition to winning the championship. The Showmanship Award is given to members that use strong expression and emotions throughout the performance.

“Being on stage in front of an audience doing something you love really motivates you to be super expressive and the Hanover competition really brought out that side of me,” said O’Connor.

A week later, on March 24, the group attended another competition at Powhatan High School and competed in the Choral Classic with two other choirs in their division and nine choirs in total.

Debut came home that day with another first place trophy, along with ‘Best Vocals’ and ‘Best Band’ trophies over all the other choirs competing that day.

Despite their multiple wins, however, Clatterbuck says that Debut’s victories did not come easy.

After their win, members have high hopes for next year. “Debut has been super successful in the past and I think that this year is more motivation for the next, and is going to be one for the books,” said O’Connor.

“I’m really proud of all our wins. It was great to see all of the hard work we’ve put in this year come to fruition,” said Welch.

Clatterbuck adds that he is very proud of his students and all that they have accomplished this year.

“This has been an outstanding year for our show choir. The students had a positive attitude and worked hard all year, and the hard work was worth all the trophies,” he said.