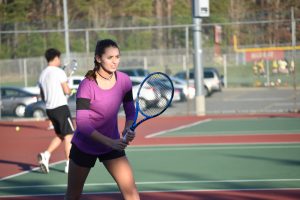 Coach quote: “Work hard, play as a team, and compete for State Championship.”

Player Quote: “I am excited for a good season, but we will have to focus on playing our best every match and cheering on our teammates.”-senior Sarah York 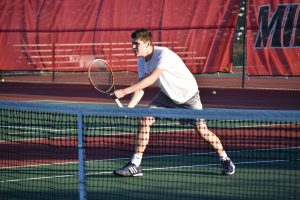 Grott getting ready to hit a volley at practice.

Coach quote: “I have watched this group come together. I think we are primed and have high expectations.”

Player quote: “I am really excited for the upcoming season because we have good team chemistry this year. The talent is on a new level. I think we have a really good shot at states.” -junior Ben Grott

Coach quote: “As of right now, we need to stay focused on taking the season one game at a time (not overlooking opponents). Also, I would like to keep more clean sheets (no goals against) this year, specifically during the regular season.”

Player quote: “After four years of being in the program, this is the most excited I have been in a long time. I know we have the potential to win States this year, we just have to work back up there.” – senior Matthew Lim 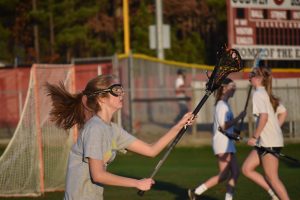 The girls lacrosse team working on drills during practice.

Coach quote: “My expectations this season are that we put everything out on the table and work hard. Our theme this year is ‘Out Work. Out Play. Out Last.’ I expect that we live up to that this year.”

Player quote: “I’m super excited for the upcoming season after our first scrimmage. I think our team has more chemistry this year compared to the past three seasons.” -senior Ashley Bocklet.

Captains: There are no specific captains. They change throughout the season.

Key games: They are all important.

Player quote: “I’m most excited about getting to be back on the field with all of the guys and making a run for playoffs this season.” – senior Morgan Wyatt

Coach quote: “The goal this year is definitely to make the Regional Tournament and see how far we can go from there.”

Player quote: “I’m excited about the upcoming season with my teammates, and I am looking forward to having another successful year!” – junior Lauren Murphy

Coach quote: “My expectations this season are that we put everything out on the table and work hard. Our theme this year is ‘Out Work. Out Play. Out Last.’ I expect that we live up to that this year.”

Player quote: “I’m super excited for the upcoming season after our first scrimmage. I think our team has more chemistry this year compared to the past three seasons.” – senior Ashley Bocklet 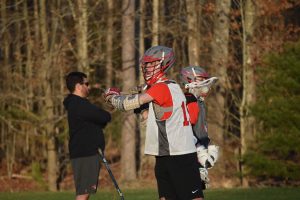 Coach quote: “Our expectation is our first appearance in the State Tournament.”

Player quote: “I’m really excited for this season because we have a solid lineup and a tough schedule, so it should be a lot of fun.” – junior Brent Blackmon 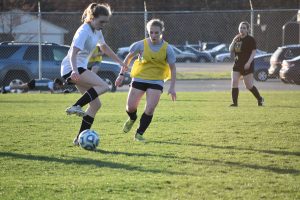 The soccer team working on a drill at practice.

Coach quote: “Even though we are coming off a season where a lot of players graduated, this returning group is closer than ever and ready to compete at the highest level. I expect big things out of this group and know we will surprise a lot of people!”

Player quote: “I am looking forward to a great season, and I’m excited for our Godwin soccer family to work together and grow as a team.” – junior Lindsey Schwartzkopf

Coach quote: “Our boys have the potential to surprise some people this year. I think we can definitely be a Top five team at Regionals.”

Player quote: “In outdoor we have many successful re-turners and lots of new talents that will help us be more competitive in meets.” -sophomore Griffin Harper

Coach quote: “Our girls are very strong this year, and I expect them to compete for the region title.”

Last year’s record: Fourth in the region, sixth in the state

Player quote: “The team has worked extra hard this season. I know we will be able to put our best out on the track.” – sophomore Renecca Brendle