Godwin senior is ready to “rock the boat” next fall 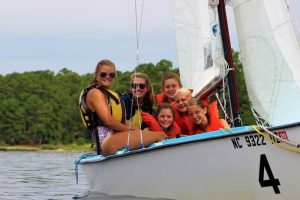 Every year at Godwin, it is common to see several students commit to schools on an athletic scholarship for team sports, but it isn’t common to see a student commit to a school for sailing.

At the age of 11, senior Emily Key began sailing at Camp Seafarer, an all-girls overnight summer camp near the Outer Banks.

Her mother, Alice Key, introduced her to the sport at the age of five, but Key did not take interest until her first summer at Seafarer.

“I began to spend my summers at Camp Seafarer, learning how to race and how different types of races worked,” Key said. “Now, I spend my summers there sharing my love for sailing with young girls and expanding my own sailing knowledge and ability.”

Outside of Camp Seafarer, Key has also participated in youth races across the East Coast. Soon, she will be participating in races at Christopher Newport University as a part of the Varsity Sailing Class of 2022.

Because sailing is not a team sport at Godwin, Key was not able to sign for CNU at Godwin’s signing day ceremony but committed for sailing and will additionally seek a major in communications.

“I chose CNU because I really like the size of the campus and how the school really cares about the individual, as well as the nautical theme it has to it,” she said.

There are only a small number of schools in the nation that offer sailing as a team sport.

Although not an official NCAA sport, the Inter-Collegiate Sailing Association (ICSA) is the governing body of all sailing competitions at colleges and universities across the nation.

According to Key, schools look at many things, not just sailing ability and academics that qualify a student. Stamina, motivation, and willingness to dedicate an ample amount of time to the sport, all while focusing on academics, are important factors as well.

Because of the scarcity of high school sailing programs, the competition in college is at a higher level.

“My first experience at CNU last year really exposed me to the level of competition, and I’m looking forward to competing with other schools at an advanced level,” Key said.

While CNU is a Division III school, the sailing program competes on a level similar to Division I with schools across the region, giving Key an advantage in showcasing her talent.

Over the course of her experience, she has learned how to sail an Optimist and Sunfish, both single-crew boats, 420s and Scots, two-to-three-person crew boats, and Lightnings, three-to-five-person crew boats. Key will mostly be sailing about 10 minutes from campus on the James River on a 420, a two-crew boat designed for speed and efficiency.

Key credits Camp Seafarer for giving her a perspective of what is to come in college sailing.

“With CNU Sailing, I hope to be introduced to a new perspective of sailing and learn more about professional racing,” she said.