Don’t sleep on The Drowsy Chaperone 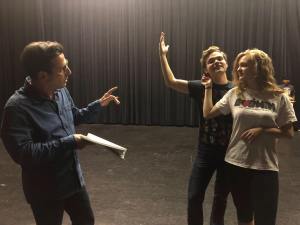 Every year, Godwin presents a spring musical, and this spring the theater department has decided to produce The Drowsy Chaperone.

“Not only is the music catchy, the dances are going to be exciting and very fun to watch. Also, it’s just simply a well written show,” said theater director Todd Coolidge.

The production is a comedy within a musical, centered around a man in a chair listening to his favorite 1928 musical on his record player. All together, 30 Godwin students were cast in this production, including the chorus.

The musical’s central character is simply called “Man in Chair,” who will be played by junior Davis West. The audience will never learn his true name. Instead, he starts talking to the audience without formally introducing himself, guiding the audience through the musical’s plot with his monologues.

“Even when there’s not a lot of big songs and big dances, the audience is going to be entranced by the Man in Chair,” said Coolidge.

Sophomore and current student director Ava MacBlane is working hand-in-hand with Coolidge towards creating the Godwin version of “The Drowsy Chaperone.” MacBlane has had prior experience through working backstage, and as an actress in former Godwin productions.

“All the people in this group are my closest friends because we’ve all worked together so often, they’re all like family to me,” said MacBlane.

“The bonding that takes place is incredible, everyone has to trust each other and to have everyone’s back, that’s another reason why theatre is so close here,” said Coolidge.