A night of “Pure Imagination”

Like a box of chocolate, Prom 2018 adds variety and twists to the typical prom theme 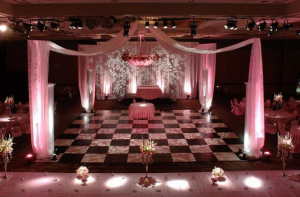 Seniors kick off their end of the year festivities with senior assassin, the senior picnic, and of course, prom. This year’s Godwin Prom will take place April 28 in the gymnasium.

The Junior SCA representatives Ansley Tyre, Sadie Williams, Alex Kim, Mason Densley, and Malone McGhee are in charge of putting prom together, along with Jessica Boppe and Heather Martin.

Last year the theme was “Enchanted Forest,” and this year the theme is “Pure Imagination,” which was inspired by Willy Wonka and the Chocolate Factory.

Contrary to popular belief, prom will not look like Candy Land. The dance floor will be decorated with custom decorations made specifically for Godwin’s prom.

“The company that we get decorations from is making us custom special decorations because this is a brand new theme,” said Boppe.

The company is excited about the challenge of creating decorations to fit the “Pure Imagination” theme because they have never done anything like it before.

Served in the commons will be heavy appetizers, desserts, and beverages. The dance will remain in the gym.

What’s different about this prom is that there will be a prom court.

Seniors will be voted for princes and princesses, and two will be chosen as prom king and queen.

Upperclassmen will vote for the prom court before prom and will be crowned the night of.

“The junior class officers are so excited to put on prom this year. I think that we will make this prom one to remember,” said Tyre.

As we approach April, the junior representatives are continuing to work hard to get everything ready.

“I’m really excited to see how it’s going to turn out, because we’ve worked really hard on it and I think it’s going to look great,” said Boppe.