As a principle, students at Godwin are constantly striving for excellence and ways to improve themselves in the many aspects of their lives. Recently, one student’s dedication to academics, as well as athletics has earned him the nomination for a prestigious award.

Senior Cory O’Shea was recently selected as a nominee for the Lexus Leadership Award. The recipient of this award will receive a $10,000 scholarship from the car company.

O’Shea found out about the award from a teacher who encouraged him to submit an application, and soon after, he was notified that he had been selected as one of the weekly nominees.

Each week, one high school student-athlete is selected to represent their high school as a student of excellence with the competition lasting 30 weeks.

Nominees for the award are selected based on academic and athletic accomplishment as well as a love for their community and willingness to serve others. At the end of the 30 weeks, the 30 nominees attend a banquet in their honor where the recipient of the award will be announced.

O’Shea, the week nine nominee, was chosen due to his love for athletics, excellence in academics, and passion for the community.

“I’ve been playing basketball and baseball since I was six years old. I’ve played volleyball since freshman year, and by the end of my senior year, I will have nine varsity letters,” said O’Shea. 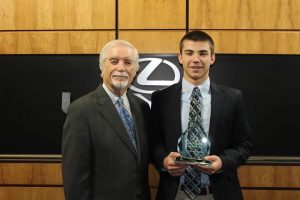 Sports have always been an important part of O’Shea’s life, and he was able to use his passion for athletics to reach out to the youth in the Richmond area.

O’Shea has been volunteering at the Police Athletic League for five years. The league includes children from the Richmond City area who haven’t had the opportunity to learn how to play various sports. The program gives them the opportunity to find a love for athletics.

“Richmond City kids come to Tuckahoe, and we provide the equipment and instruction they need for the particular sport we are doing that day. I’ve also gotten to teach them how to play baseball, and it is always a great experience,” said O’Shea

Along with volunteering at the Police Athletic League, O’Shea has volunteered at the Godwin Baseball and Basketball Camp over the summers as well as tutoring with Government teacher and Academic Advisor Julie Richardson.

O’Shea enjoys his work as a mentor for younger children through his coaching, as well as helping his fellow students thrive in their schoolwork.

Learning has always been a priority in O’Shea’s life. According to O’Shea, being in the Center for Medical Sciences at Godwin requires focus, dedication, and a strong work ethic in order to succeed.

O’Shea credits his dedication and work ethic to the Richmond Montessori School, a school he attended in his youth.  This private school is known for its methods in independent learning and self-motivation that encourages children to find creative solutions and work in ways that will help them in the future.

“Going to Richmond Montessori School really helped me find my work ethic and motivation to succeed in life. My parents have never forced me to do anything I didn’t want to do and have always encouraged me to do my best because that is how they were raised. Their parenting, combined with my experience at that school is how I learned to really want to learn and find things out for myself,” said O’Shea.

Another individual who inspired O’Shea was former teacher Todd Phillips, who passed away in an automobile accident in 2016. According to O’Shea, not only was Phillips an inspiring coach and teacher, but the advice he gave to O’Shea was key in helping him start off on the right foot.

“When I was a freshman, I had T-Philly and he was a big inspiration to me. He understood what it was like being a center kid and how stressful it could be trying to play all these sports, as well as keeping up my grades and volunteering. He told me that all that matters is if you are putting forth your best effort,” said O’Shea.

So far in his senior year, O’Shea has been named top of his class and is the projected Valedictorian for the graduating class of 2018. He is also a member of Math Modeling and the Beta club.

Recently, O’Shea was accepted into The Massachusetts Institute of Technology, commonly known as MIT. He plans to attend in the fall and although he doesn’t know what he will choose career-wise, he wants to pursue a career in applied mathematics and computer science.

While interning at VCU over the summer, O’Shea’s desire to pursue math and science grew as he worked in the Department of Applied Mathematics and Field of Graph Theory.

“Yes, I am proud of myself, but there are more important things in life than being Valedictorian. I hope I can achieve more in my future jobs and life in general,” said O’Shea.