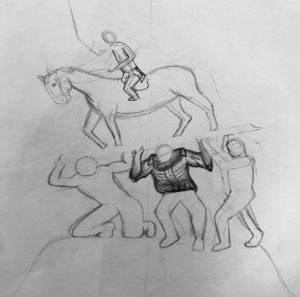 Over the past few years, monuments have become an object of controversy throughout our nation.

The tragedy in Charlottesville and issues surrounding Monument Avenue amplified that controversy, hitting close to the Godwin community.

On Aug. 11, Neo-Nazis and protestors of the removal of confederate statues rallied around   Charlottesville’s Robert E. Lee statue at Emancipation Park.

Art teacher Lindsey Hurlburt decided to create a project that addressed the monuments and the issues surrounding them.

Her inspiration came from a dear friend of hers, a police officer who passed away during the Charlottesville protests.

“The project is personally meaningful to me, and I think this is the first time where there is an opportunity to study art that is deeply meaningful, timely, and that really shows the importance of our public art, and how it affects our community,” said Hurlburt.

Hurlburt researched different possibilities for her project so that she could assign the project without offending anyone, as well as allowing all of her students’ opinions to be heard. The assignment was given to her Art III students.

The students must research the five Confederate monuments placed on Monument Avenue, and decide based on that research and on general public opinion whether or not they want to take down the statue, add another statue near by, or keep the statue as is.

If the students wish to take down the statue, they must figure out something to put in its place.

“My students will draw what they believe their statue should look like, and the idea is to then present some of their ideas to the Commission.

“I believe that having their ideas presented in an official setting could really empower them,” said Hurlburt.

Before the project even got started, Hurlburt wanted her students to have a clear understanding of the debate surrounding the statues on Monuments Avenue.

Hurlburt does not hope to change her students’ minds, but she said that she wants them to become critical thinkers and problem solvers, and also to learn the history and visual impact of these statues in order to gain a more well-rounded and educated opinion.

“I believe that it is important for other subjects to address controversial issues because I personally think that the reason things like what happened in Charlottesville happen is because there are not enough critical conversations about race relations.

“[A]s a teacher in any subject matter, we have the opportunity to facilitate those conversations with our future,” said Hurlburt.