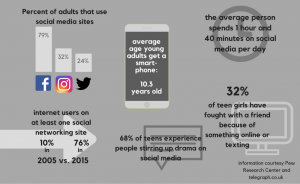 In the 21st century, social media is constantly advancing and updating. It has gone from a place to post pictures to somewhere people can gain money and opportunities.

As social media becomes more widespread, the number of people who have access to it grows. It is difficult to find a person who is not connected to social media in some way, whether it be Twitter, Facebook, Youtube, or some other new social media.

During the third quarter of 2017, there was an average of 330 million monthly active Twitter users, more than the population of the United States. Instagram recently hit 600 million monthly users. Youtube has an even larger rate of active users, at approximately 1 billion per month.

I use social media for everything from meal ideas, to school work help, to other ways of filling my time.

It is now easier than ever to access social media as smartphones have become more available to everyone. With the constant updating and releasing of new phones and other technology, it is easier to get access to media, as the prices of the older models lower.

However, with social media being such a big part of our lives, it is easy to get caught up in the idea that you are just interacting with a screen, as opposed to actual people.

Professors Keith Wilcox and Andrew T. Stephen recently wrote a study titled “Are Close Friends the Enemy? Online Social Networks, Self-Esteem, and Self Control”, in which they attempted the question of how social media affected human behavior and relationships.

In their article, Wilcox and Stephen claim that “from a motivational perspective, people use social networks to fulfill a variety of social needs, including affiliation, self-expression, and self-presentation,” or that people use social media as a way to make them feel better about themselves.

As a result, people can start to use social media as a crutch to help validate themselves where they might not receive such validation in real life. This aspect of social media is not a negative one.

However, often times, on sites such as Facebook and Twitter, where people are connecting via the internet, people will often share their opinions on relevant topic matters such as political and social issues that can easily lead into arguments.

When people get into arguments online, they quickly turn into heated exchanges of name calling and disrespect, and if someone really wanted to, they could easily find the others information and post it for everyone to see.

When you do not have to see someone face-to-face, it is easy to dissociate from the idea that they are a person outside of the internet with a life and a family. People, therefore, feel they can do and say things with a clear conscience because they do not have to see the outcome of their actions.

Even if I do not necessarily agree with someone’s opinions, words, and/or actions, unless they are harming someone, there is no legitimate reason to attempt to “doxx” (expose their information in a public setting) everyone who may potentially slip up.

On Twitter especially, there is a growing culture of people finding the mistakes someone has made in their past and using it to shine a largely negative light on them, even if they may have grown since.

Social media has caused people to communicate with more ease, but less effectively. People are incapable of thinking behind the screens of their phones or laptops.

People will use the internet to show them harming someone else or doing things that make them seem cool, but they do not care. They do not think about who could see it or save the images for a later date.

I have relatives that my mother has stopped speaking to all together, just because of fights on social media. They allow their anger and differing opinions to cloud the fact that they are talking to a supposed loved one, slip up and say something out of rash anger, and cause a rift in the relationship.

I know people who post things without thinking of the consequences and subsequently ruin friendships and friend groups.

There is a certain level of disillusionment when it comes to how people act on the internet. They act in the heat of the moment without thinking through the consequences.

For instance, this past summer, the Atlee Girls Little League team was disqualified from competing in the Junior League World Series after a post on social media, giving the finger to their opposing team.

Despite the fact that they deleted the post and promptly apologized to the team in question, they were disqualified and their opponents went on to the finals.

Had they not have posted that on social media, they would have been able to advance on. But social media gives a person this false sense of security, as if they are unstoppable.

Setting your accounts on private or not having your Snapchat on public does not mean no one is able to see the things you post. Those who follow you still have access to your accounts and can share the post with their friends.

If something is posted that does not necessarily show you in the best light, it can quickly spread through social media and reach people that you would not want to see it.

By adopting a different persona or personality online, we may or may not show our most authentic selves. When we post on social media, it never vanishes from the internet in its entirety.