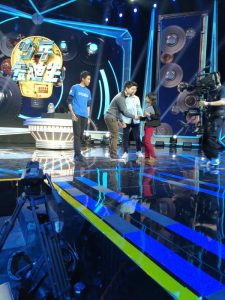 Godwin prides itself on their numerous students who go above and beyond in their academics, extending their education beyond the classroom. Senior Kevin Rao is a prime example of this type of student.

Rao was given the opportunity to participate in the Junior Edison TV show in Shanghai, China. It works to provide a platform for young students to exercise their inventive thinking skills.

A student that is invited to the show submits an invention of their own creation that proves to be both practical and favored among the public.

Rao decided that the goal of his invention would be to lessen the number of medical deaths in the world.

“I decided to focus my project on ending deaths by medical error after I read an NPR article that explained that medical errors are the third most common cause of death in the U.S,” said Rao.

Rao then began to perform research on ways to solve the issue of medical errors, and he came across the idea of technological intelligence.

“I was intrigued when I learned how well technological intelligence is able to perform complicated tasks both quickly and efficiently,” said Rao.

It was then that Rao decided to create technological intelligence that had the capability to analyze cancer treatment records from a database and use that information to recommend treatment to cancer patients.

“I liked the idea because it did not only confront the issue of medical error, but it also worked to decrease deaths [caused] by cancer,” said Rao.

His technology earned him first place in his category and fourth place overall at Metro Richmond Science Fair (MRSF). From there, Rao was invited to participate in The International Science and Engineering Fair (ISEF). At ISEF, a former contestant on Junior Edison showed interest in Rao’s project, and recommended him to the show in Shanghai. Rao was then accepted as one of the six participants of the show.

Rao then traveled to Shanghai between Nov. 15 to Nov. 22 to appear on the show. The show had two main parts. In the first, Rao presented his research to an influential figure in the scientific and business academic fields.

“Hearing the feedback from Yu Lizhong, the Chancellor of NYU Shanghai inspired me to pursue my research once I enter college,” said Rao.

The second part of the TV show involved Rao presenting his project and research to an audience as well as a panel of judges. It was here where Rao gave a speech about his aspirations in the medical science field and his future intentions with his project.

However, to Rao the show was much more than a competition.

“I was truly surprised with the diversity present in the program. I met people from all around the globe including places like Finland and Hungary,” said Rao.

By meeting the other participants from around the globe, Rao realized the importance of international collaboration and experiencing other cultures besides your own.

“I now see that connecting cultures provides new perspectives and insight that you may not have been able to see, it brings new light to things that were once unsolvable predicaments,” said Rao.

“This trip taught me to never stop improving something, even if you see it as complete. Always find ways to expand your aspirations and discover new ways to innovate and work to increase the impact of your work on the world,” said Rao.