Discovering the world through dance 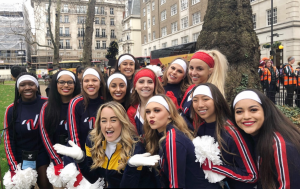 Over break, lots of students relaxed and enjoyed their days off by lounging around and spending time with friends and family. For two seniors however, their winter break consisted of a great opportunity to travel to Europe.

Seniors Lexi Zirkle and Sonja Thompson got to go to London and dance in London’s New Year’s Day Parade over break. Every year, over 8,000 dancers, acrobats, marching bands, and other entertainment acts participate in this parade which attracts over 500,000 spectators.

Broadcasted on live television in the UK, the celebration is filled with performances, music, and large floats. People from all over the world come to London to watch and perform in the parade.

Every summer, Godwin’s dance team goes to UDA, a dance camp at JMU. While there, the dancers learn a dance that incorporates styles like jazz and hip hop. After just one day of practice, the dancers audition in pairs in front of the entire camp. The auditions were optional, and only Zirkle and Thompson auditioned from the Godwin Dance Team.

Zirkle and Thompson were chosen based on their auditions to travel amongst 700 performers to London for the parade. Even though the girls had to audition with people from other schools, they still were able to perform together in the parade.

The trip was from Dec. 26 – Jan. 2. Since they were there for a couple days before the parade, the group was able to tour London before having to practice.

“We took lots of tours and saw many parts of London, then when it got closer to New Years, we had rehearsal,” said Thompson.

On parade day, Zirkle and Thompson’s group performed their dance over seven times in various parts of the city along the parade route. When it was time for the finale, the girls got exciting news.

“They told us that our small group of dancers was chosen to be in the grand finale which was amazing,” Thompson said.

Both Zirkle and Thompson found the trip to be an incredible experience and that they were able to meet new people and make new friends.

“The entire trip will always be so memorable because it helped me discover what I want to do in the future,” Thompson said, “but something I will never forget is on the last day how rainy and cold it was so my group all huddled together and sang all our favorite songs.” Thompson is moving to Los Angeles after graduation to pursue a career in dance.

For Zirkle and Thompson, this trip brought new friends, big dreams, and the opportunity of a lifetime.