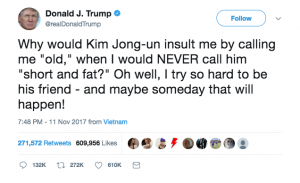 For years, my older relatives warned me against putting too much personal information out on the internet, as I could not control who would see it.

“You have to be careful, love, when you’re older, your future employers could see what you did years ago and not want to hire you.”

Because of statements such as this, I have controlled my social media with the knowledge that it can be broadcasted to hundreds of thousands of individuals in a matter of seconds.

As a teenager in the 21st century, it is expected of me to be connected to the world via social media, and I live up to these expectations.

Nowadays, it is very rare to find a teenager who does not have an Instagram account, a Snapchat, or my personal favorite, Twitter. It manages to encompass a number of things within one app. I can know what’s going on in the world, while also having the ability to like and retweet funny jokes.

It is expected of me to make occasional mistakes online as a result of my youth. But I am a teenage girl. My mistakes are not broadcasted to millions of people. I am not the representative of an entire nation.

President Donald Trump, on the other hand, does represent the nation and is a man with a notorious Twitter history. Even before the 2016 election, he would constantly tweet his thoughts and opinions on current events and topics.

Moreover, Trump is constantly contradicting himself. There are many examples of times when the president has made an official statement, then goes on to social media at a later time, opposing what was said in the released statement, or vice versa.

Earlier in the year, the White House released a statement in regards to retaliating against the chemical weapon attack by the Syrian government. However, during the time of the Obama administration, Trump was adamantly against such actions, stating that “there [was] no upside and tremendous downside.”

While campaigning, Trump would tweet in regards to his fellow candidates with terms such as “Crooked” or “Crazy,” having the intentions of demeaning them in a public manner.

Trump’s twitter habits did not change following his election. He continued to refer to people such as Hillary Clinton with terms such as “crooked,” and news outlets as “losers.”

Recently, the president tweeted in regards to the leader of North Korea, Kim Jong-Un.

“Why would Kim Jong-un insult me by calling me “old,” when I would NEVER call him “short and fat?” Oh well, I try so hard to be his friend – and maybe someday that will happen!”

Following this tweet, the users of Twitter were quick to respond. Responses ranged from questions of the president’s sanity to expressing exasperation and exhaustion of the current president.

The president seems to have an affinity for tweeting his mind without collecting his thoughts, and on an app where someone can tweet something and have it seen by millions of people in a number of seconds, is borderline childish and possibly dangerous especially considering his 42+ million followers.

Trump’s tweet resembles that of a stereotypical teenage girls ‘burn book’ entry, in terms of both context and word choice. He takes neither care nor mind to collect his thoughts into those of a rational adult.

When people think of the president, they think of someone who can handle themselves with eloquence and sophistication when faced with trying social situations. They expect their president to represent the country in a positive light, and to hold and treat others with an air of respect.

Trump fails to do all of these things. By publicly responding to something as seemingly trivial as another leader calling him “old” (which, in itself is not untrue, seeing as Trump is 71 years old), Trump portrays America as a country that cannot handle meaningless comments, moreover, responding to them in a manner that is both uncouth and classless.

For the president to completely disregard the fact that he is the figurehead of our nation shows much of his character and what he views important. He cares more about his own appearance, pride, and ego than how America is portrayed in the eyes of other nations.

With today’s political state, it is hard to remember a time when the most offensive thing a president did was when Obama wore a tan suit and was subsequently criticized for “disrespecting America.”

Nowadays, the president can tweet, and potentially ruin, foreign relations in a matter of seconds. America’s relationships with other nations is not something to carelessly handled or mishandled.

Trump’s Twitter account continues to go unchallenged, mocked and, for the most part, dismissed as if no one takes it seriously. Despite a number of people questioning if the president even has his tweets reviewed before they are sent out to the general public, he continues to tweet freely and ignorantly.

In times such as these, where our political climate is in such a state of unease, it seems imprudent to remain blithe to these topics.

It is time we all hold the president to the expected standard, and stop dismissing his actions as harmless ramblings to be ignored.