It’s time to give power to the youth 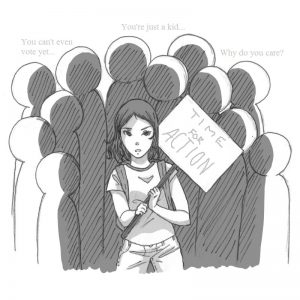 I have always considered myself politically aware. Memories of mornings in my house were always backed by the background noise of whichever news station my parents preferred at the time.

It was never a matter of “oh they’re children, they don’t need to be aware of anything until they’re older,” in my family. Dinner conversations included discussions of governmental decisions and what my parents thought about them.

My parents never attempted to shield and sugarcoat the reality of the world, as I have heard some parents did while their kids were growing up. They always made sure that, if I was seeking knowledge and awareness, that they would help me learn, instead of squashing my curiosity.

I was too young to be able to recall the first two elections that took place during my childhood, but I vividly remember my mother’s words following the 2008 election.

“I want you to hold your head so high, and stand so tall, that you are constantly looking down your nose. I want you to realize just how historic this is, the first black president.”

I was taught, growing up, that politics were for everyone, and that the democratic system was chosen to give everyone a voice. Ironically, as I got older, people began to look down on me for voicing my opinions.

It seems to be a trend, as of late, to shoot down those in the age range of being able to understand what is going on in the world, but not being able to vote.

Older generations expect us to sit quietly and just watch as the world happens around us, to sit and listen to the “grown up” talk but not speak.

However, these assumptions that the younger generation should essentially stay out of politics creates a political system young people believe they do not have a voice in.

According to the Pew Research Center, millennials rival baby boomers as a political force, averaging about 31 percent of the electorate. If millennials exercise this power, they have the potential to make influential changes in the American political system with the election of politicians and the policies they pursue in order to gain the millennial vote. Yet, more often than not, millennials do not show up in masses to the voting booths.

There is a lot of speculation as to why the younger generations do not get out to vote as much. Older people like to believe that it is because “millennials are lazy and don’t care about the country or politics,” and it appears the media has jumped onto that bandwagon as well.

In some ways this is true. Young people are disengaged in the American political system. However, the question comes down to whether this disengagement stems from a perpetual laziness or rather, from a polarizing and inefficient political system.

With the partisan divide growing between the political parties and polarized debates evident among political leaders, young people seem to vote only when the election evokes strong emotions.

This is evident in 2008 with an increase in young voters’ turnout rates due to a general excitement to elect the first black president, Barack Obama. The Census Bureau reported that 48.5 percent of registered voters ages 18-24 voted in this election.

In Virginia as well, young people recently came out in strides during Virginia’s 2017 Gubernatorial Election with youth turnout rates at 34 percent, an eight percentage point increase from the 2013 Gubernatorial Election. Many political scientists speculate this increase in youth voters was in response to the Trump administration.

In comparison to the 2012 presidential election, the 18-24 voter turn-out dropped seven percentage points to 41.2 percent when the younger voter demographic didn’t feel an emotional connection to the election.

With these elections and other elections with higher youth turnout rates, young people have proven they can play a critical role in the election process, and change the current political system with their added voice. However, if young people are not taught at an early age to appreciate the political process and democratic system they will not be able to evoke that change.

In Virginia, it is not until 12th grade that students take a class to learn about politics and government, despite the fact that the majority of seniors have already reached the age of 18 and are legally able to vote. This is similar across the U.S. with many students only introduced to politics in high school.

Civics courses are offered in middle school, but seeing as it is not a required course, many students chose to skip it and head straight into World History to fulfill graduation requirements. This means that many adolescents are not exposed to politics in their high school years.

As a society that seems to value the idea of knowledge and practicing one’s right to vote and being active in our political climate, we do not prepare younger generations nearly enough to meet this standard.

This stifling of knowledge trickles over into how people feel about voting.

As soon as someone turns 18, they are expected to vote and have a fully rounded knowledge of the political climate of which they live. But how would they have this expected knowledge if older generations shoot them down every time they voice a politically charged opinion? How can they understand what they are voting for in an education system and society that does not engage young people in politics?

In times where expressing your thoughts and opinions is so pertinent to political progress, older generations should not be shutting down teens who are interested in politics. They should, in fact, be doing the opposite.

Candidates in elections have started to catch on to that fact. They have started to offer the opportunity to help campaign and spread their message to younger people willing to help out. They realize that the youth are the majority, and are vital to their own winning.

As candidates try to appeal more to younger generations, it is becoming more apparent in voting statistics.

If older generations want to see more political participation in younger generations, they must create a dialogue that opens a conversation and flow of knowledge, and does not patronize those who seek it.