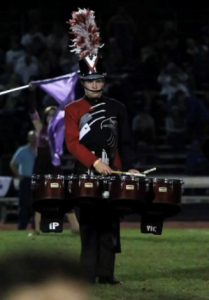 For the past two years, indoor drumline was removed from Godwin’s extracurricular activities. This year, Godwin is reinstating indoor drumline, which is a competition consisting of the percussion aspect of the marching band, and combines theater with performance.

The drumline is judged on three main factors: how they sound, creativity of the performance, and their marching skills.

According to members of Godwin’s Indoor Drumline, they are proud and eager to represent the school in the form of percussion.

Not only will this competition test their abilities as drummers, but it will also test their marching ability and overall skills as a performer.

Senior Marianne Esche is a captain for the indoor drumline and is excited to guide the team.

After leading a successful season in marching band, Esche is eager to finish her senior year at Godwin with a successful finish in indoor drumline, hoping to end the season with a victory.

“I have high hopes to exceed at competitions and enjoy my last season marching in the Godwin drumline,” said Esche.

Coach Michael Auman, referred to as “captain” by the team, runs the drumline.

Auman has been teaching and writing for the Godwin drumline since 2004.

According to Auman, he is thrilled to be in charge of the 2017 Godwin Indoor Drumline and is ready to march them to success.

“Learn everything you can. You never know when you’re going to need to recall the information that has been given to you. Learn the information correctly the first time! Making mistakes is part of the learning process, so don’t be afraid to make them,” said Auman.

Sophomore Will Burgoyne is a member of the drumline, and said, he is extremely excited to be a part of the show this year.

“I hear lots about past shows, and I am glad to have it again for my first year in drumline,” said Burgoyne.

Burgoyne has been a member of the Godwin Marching Band since freshman year.

Samuel Payne is also a sophomore at Godwin and a member of the drumline.

“I am so excited to be a part of this year’s indoor drumline,” said Payne.

Payne is a bass drummer and hopes to get better during the course of the drumline season.

“I am looking forward to the great season ahead,” said Payne.