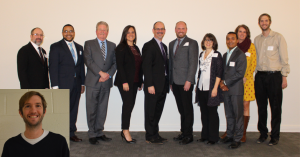 Studying abroad is a priceless opportunity that many people cherish. Traveling to a new country to learn for an extended period of time, however, is a prospect rarely available for people outside of college.

Godwin teacher Jon Lauder was granted such an opportunity.

This year, Lauder was awarded the R.E.B. Award for Teaching Excellence, an honor given to public school teachers who demonstrate impeccable classroom teaching skills.

According to the Community Foundation of Richmond, teachers eligible for the R.E.B. Award are full-time, public school teachers in the City of Richmond, Chesterfield, Hanover, Henrico, and the Department of Juvenile Justice who have a “strong knowledge of subject matter, dedication to the teaching profession, inspires students and peers, motivates students to develop skills and form positive habits towards learning and discipline, and utilizes creative methods to engage students in the subject matter”.

Each year 15 teachers from around the state are awarded the scholarship.

“I was pretty surprised to win. When you read the highlights of some of the other applicants, it is pretty humbling. Our area is full of passionate, hard-working educators who have really cool ideas on how to improve education,” said Lauder.

Award recipients receive a grant ranging from $4,000 to $12,000 that can be used for obtaining a new degree or, in Lauder’s case, traveling around the world.

In the summer of 2018 he will “trace the origins of modern government by observing major western cities pre-Enlightenment, during the Enlightenment, and then through liberal revolutions.”

Lauder is planning to travel to Paris, Vienna, Munich, and Philadelphia.

“The hardest part for locations was figuring out how to squeeze in as much as I could in a relatively short period of time,” said Lauder.

“Paris made sense as the center of the Enlightenment and Vienna as the city that probably resisted liberal changes the most aggressively. And, of course, no analysis of democracy is complete without America.”

After spending the summer abroad, Lauder hopes that his experience will further enhance his teaching abilities.

“I’m a believer in the idea that things are better when they are experienced not just read about. It drives me crazy when students read spark notes instead of a classic novel, or look at a painting on-line instead of going to the VMFA, so I think visiting these places will give me a first-hand experience that will improve my teaching,” said Lauder.