Many high school students participate in their schools’ choirs and band programs. However, only a select few are recognized on a state-level for their achievements. 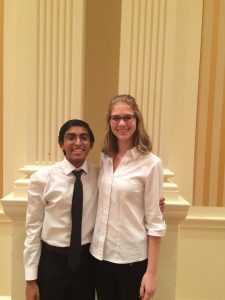 Sarkar (l) and Bogin at their performance for the choir.
photo courtesy Abigail Bogin

Seniors Shaandro Sarkar and Abigail Bogin were recently selected for and participated in the Virginia Senior Honors Choir.

The Virginia Senior Honors Choir is a select choir for the best choral students in Virginia and chooses about 130 students to perform in a concert at the Homestead Resort in Hot Springs.

The choir is considered a prestigious honor among choral students. Since over 600 students from across Virginia were interested, a tryout was required to trim the numbers down to a choir of about 130 students. At the tryouts, the students were required to perform a prepared piece and sight-read eight bars.

“This was not a blind audition as the judges could see you, which was different for me in comparison to other auditions,” said Bogin.

After they were selected, the newly formed choir met to practice for a few days before the performance. They practiced pieces to perform such as “Father Williams” by Irving Fine and “The Best of All” by Deen Entsminger.

According to the two seniors, the performance was the highlight of the experience as it left a positive impact on them.

“The performance was just amazing; each chord gave me chills and the atmosphere onstage was electric,” said Sarkar.

The two did not get to this point in their careers overnight though. Both seniors have spent most of their lives practicing their craft.

Bogin has been developing her choral skills since her middle school years.

“I have gotten to where I am today because I have been taking voice lessons since seventh grade and practice skills every night such as sight reading,” said Bogin.

Sarkar has a similar take on his success up to this point.

“I’ve been singing since I was four, and I’ve sung in choirs since middle school. I’d say that practice and experience have been most influential in getting me to where I am,” said Sarkar.

Overall, the performance and experience gave off a positive vibe to both seniors, especially Sarkar.

“Our director, Dr. Deen Entsminger of Belmont University in Nashville, strongly emphasized positivity and inclusiveness in the choir. Singing in a choir is also such an excellent way to connect with other people,” said Sarkar.

Devin Esleck is another senior who is successful in music. He recently participated in All-State Jazz Band for Virginia in the middle of November. 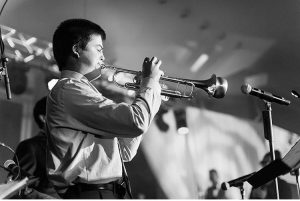 Esleck performs with the band at the Homestead Resort. photo courtesy Devin Esleck

All-State Jazz Band is a select band that requires an audition. Once admitted, you travel to the Homestead Resort, practice for two days, and then perform in front of the families of the band and the various music educators at the Music Educator’s Conference.

For the tryout as a trumpeter, Esleck was required to play a prepared piece, improvise a piece, play several major scales, and do a sight-reading.

“This was a very select choir as about 50 or 60 kids tried out and only eight are admitted into the jazz band,” said Esleck.

When Esleck arrived at the Homestead for the event, he practiced pieces such as “Mad Nomads” by Henri Texier and “A Call for Demons” by Sun Ra. Esleck was given the opportunity to show off his ability as he performed a solo in “A Call for Demons.”

Similar to the choir students, Esleck believes he would not become the musician he is today without dedication and practice.

“To get to where I am today, I practice as often as I can and practice outside of school often,” said Esleck.

Esleck also was inspired by his family to take up an instrument.

“My dad is a professional musician, so he got me involved in music at an early age,” said Esleck.

The whole experience was a positive one for Esleck as he embraced the company of fellow musicians.

“I really enjoyed seeing people who love music as much as I do,” said Esleck.