Sports through the generations 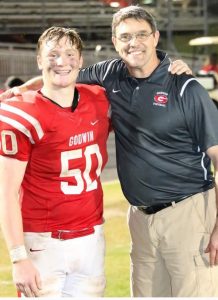 Nick and his father John Aaron both play/played football in high school.

Senior Nick Aaron currently plays offensive line as center for the Godwin football team and hopes to possibly play in college. His father John Aaron played football in high school and played the same position as Nick for his team’s offensive line.

Often, when your father plays a sport, you are also bound to play that same sport.

Nick credits his father for influencing him to pick up football when he was younger.

“My father had a very big impact on me and why I play football. I probably began playing when I was five because of him, but as I grew, my love for the game also grew,” said Nick.

Nick has seen changes from how he plays football in comparison to how his dad described playing football in his day.

“I think football has changed in many ways. I think it is more national now, and what I mean by that is, with the internet and social media, everyone knows every good player regardless of who or where he plays. However, when my father played, it was only whoever you saw on the major TV stations,” said Nick.

Nick describes current styles as “based on coach, player abilities, and they can even change to adapt to the type of team you are playing.”

Nick’s father John has seen a difference between the style of his son’s team versus when he played.

“When I played we ran the ball a lot more” said John.

John said that when he played, their objective was to run in order to set up the pass, but currently it is to pass to set up the run.

John has seen a difference between the popularity of the sport, as well.

John said that the sport is “less popular because the idea of head injuries and concussions have kept people from playing.”

“Recruiting has completely changed. With the resources coaches have now, it is tough for any player to be missed. Coaches now are always one year ahead,” said John.

John also believes his practices were far more difficult than his son’s practices. Back when he had practice, water wasn’t nearly as available, and injuries were played with regardless of the severity.

According to John, having a child who plays the same sport as you [the parent], gives you a chance to watch the sport change right before your eyes.

Nick believes his game has significantly grown because of his father, and without his father’s mentorship, he does not believe he would be the player he is today.

Bobby Woods and his daughter Haley both play/played basketball.

Senior Haley Woods said it was her dad who influenced her to pick up the sport early on.

“When I was younger, my dad and I would go outside and shoot baskets,” said Haley.

Haley plays as a guard for the Godwin girls basketball team.

While discussing basketball with her dad, Haley realized how the game has changed.

“They are less physical now, and there are more fouls called now,” said Haley.

Compared to her father’s practices, Haley described her practices as “starting with dynamic stretching and then run our breaks. After that, we start doing a bunch of drills and scrimmaging. Practice always ends with everybody’s favorite: running.”

Haley believes sharing a sport with your father gives an insight on how the game has changed.

Through her father’s knowledge, she has learned how women’s sports have changed.

Haley believes that there are more opportunities for girls to play basketball now.

“It’s not frowned upon as much for girls to play sports nowadays,” said Haley.

Bobby once played basketball at Highland Springs and Benedictine. He has stayed a big fan of the game, and the only difference he has been able to notice between when he played and now is the AAU circuits.

Over time, Bobby realized  that the game has become more popular due to media coverage.

When it comes to girls’ opportunities to play basketball, Bobby said, “It’s become a lot more popular due to Title IX and the stigma of girls playing sports no longer existing.” 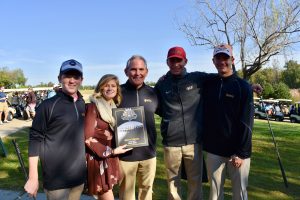 Jacob and Rusty Vernon after is inducted into HOF. photo courtesy Cannon Binns

Jacob and Rusty Vernon both share the same passion for baseball. Jacob was influenced to play baseball by his dad because his dad was the one who taught him how to play.

Jacob plays baseball at Godwin as pitcher or plays in the outfield, and is a serious baseball enthusiast.

“I think baseball is more competitive now than it was back then because people are playing baseball year-round. Back then, they would only play during baseball season,” Jacob said.

His father, Rusty, played baseball as a third baseman for VCU and is a member of the VCU Hall of Fame.

Compared to his son, Rusty believes that the sport has become less popular due to the fact that everyone shares air-time now.

However, Rusty believes the game has stayed the same or maybe increased in popularity among the players.

Rusty also describes the game as considerably less dangerous, and that being spiked, or having a catcher run-over, was a gamely occurrence, compared to now where rules prevent that type of play.

Over time, Rusty has realized the different in-game strategies.

For example, back when he played when there was a runner on second, they would sacrifice bunt to advance the runner.

He realized that in today’s game, they do not waste outs, and there are recognizably fewer sacrifice plays.

Jacob believes without Rusty’s tremendous successes as a baseball player, he would never have been interested in the sport.

According to Jacob, he can thank his father for giving him a passion in baseball. 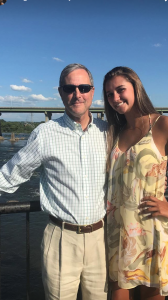 Emily Wirt and her father Bill Jeter both play tennis.

The highest level of competition that Jeter was able to reach was his college club team, but he has high expectations for his daughter.

Wirt was influenced by her dad to play tennis because he was the one who originally taught her how to play.

Wirt said, “Tennis is much faster, and there is a lot more physicality involved than there used to be.”

Wirt believes that when her dad played, it was more skill-based, but now, due to the physicality, the training involves a lot of conditioning.

Jeter said that when he played, it was much easier, and he never had to work nearly as hard as his daughter.