Preparing for the future

Specialty tech students use their skills to find work experience

Throughout high school, almost every student takes on a part-time job, often times at a restaurant or retail location. However, for students in the technical center, the jobs they pursue often correspond directly with their future career plans.

The tech center provides students with the opportunity to learn and specialize in specific career paths. Students spend half of their school day at their “home school” and the other half at either Hermitage High School or Highland Springs High School. Students can apply to enter the program in their junior or senior year. 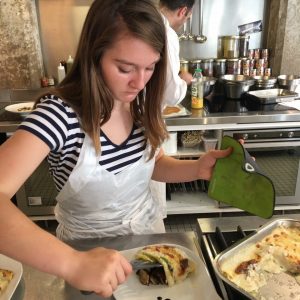 Junior Sarah Ingersoll is part of the Culinary Arts Tech Center at Hermitage High School, and she showcases her skills as a line cook at The Daily Kitchen and Bar in Richmond.

Throughout the entire experience, Ingersoll said she has learned new techniques, people, and communication skills, as well as “learning how to correctly cut an onion.”

Ingersoll works up to 18 hours a week, from Friday to Sunday in a fast-paced environment.

With her position as a line cook, she is given eight minutes to prepare a dish for the customer.

“We get to work catering events, and with the most recent one coming up, we’ll be cooking for senators,” said Ingersoll.

Despite the time crunches and the high profile engagements involved with her job, Ingersoll plans to continue working as a cook and eventually become a chef.

“The reason I keep at it is because I’m good at it,” said Ingersoll

Long-term, she plans to continue working in her current position, then attend the Culinary Institute of America in New York to pursue a BA in culinary arts, as well as a BA in business management.

To anyone considering applying to the tech center, Ingersoll said to “definitely apply if you’re serious about it.”

For Senior Reece Appel, the appeal of the Aerospace Technical Center stemmed from presentations of the center in the 10th grade.

“When you complete your two years in the center, you finish with 28 college credits to VCU, without having to pay actual college tuition. You get more done in high school with less cost,” said Appel

Within the center there are college-level professors who teach subjects such as physics, calculus, and chemistry.

Appel plans to continue with aerospace engineering in college, and he is currently looking at universities such as Purdue, Michigan, Texas State, and Case Western University.

Over the summer, Appel attended the Seminar for Top Engineering Prospects (STEP) at Purdue University.

“The things I’ve learned at the center definitely helped me within the program,” said Appel.

“The center is definitely something you have to stay committed to, as it is a tough and rigorous course load, but as long as you ask questions, that will really help.”

Senior Cole Richardson is a part of the Heating, Ventilation, and Air Conditioning (HVAC), tech 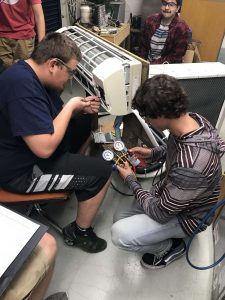 center for Electrical and Plumbing at Hermitage High School.

In addition to tech center work and classes at Godwin, Richardson will have an apprenticeship after school at either Michael & Sons or Howell’s Heating and Air, but he is currently undecided on which he wants to pursue.

After finishing his apprenticeship, Richardson will receive a Universal 608 Certification, which will allow him to repair and service a number of appliances.

“I’ve gained a lot of knowledge on how to work on basically anything in a house. You learn a lot about pressures and temperatures of different refrigerants, electrical circuits, and basically how to get things working,” said Richardson.

Recently, Richardson won second place at the Virginia State Fair Skillsusa competition with his partner, Josh Harris, a senior at Hermitage High School. For their win, they were gifted 700 dollars worth of tools.

In addition to the center and school work, Richardson also works a part-time job at Wegmans.

“I’m in the center, which is my career choice, so I don’t necessarily have to worry about taking a bunch of AP classes, but it takes time to find an equilibrium that will allow you to get everything you need to get done on time,” said Richardson. 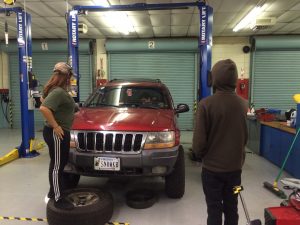 Choate (center) fixing the car his class has been working on this past marking period.
Photo curtesy Simon Choate

Senior Simon Choate is a part of the center for Automotive Technology at Hermitage High School.

“My mom first introduced the idea when the conversation of college and tuition costs came up, and so I looked at the open house for the center.”

Come second semester, Choate will have an internship at either a dealership or automotive shops, such as Royal Chevrolet, Advance Auto Parts, and Car Quest, where he can apply his teachings to real world situations, as well as get paid as a regular employee.

“The internships allows us to see how what we’ve learned applies to a job, not just how to do the work, but the business aspect of it as well.”

In addition to the internship, the center also allows the students to bring their own cars in to work on, which provides them with additional practice and learning experiences, and saves them time and money.

“The center is a really good place for anyone looking into specializing in a trade. It’s not just one center with one focus. There’s tons of additional programs,” said Choate.

“My mom first pushed me to apply for the center. She brought up the fact that I love math and science,” said Beal.

Beal plans to major in engineering in college at either Virginia Tech or James Madison University.

“The center is a really good place to gain knowledge, you get to do a lot of hands on learning related to your specific program,” said Beal.

“You get 28 college credits once you’ve finished the program, which saves you time and money, so it’s definitely something I’d recommend doing,” said Beal.

The summer prior to entering the center, Beal had the opportunity to see programs at VCU, which enabled him to see potential courses he could choose in the future.

“The center has a really rigorous course load, so it has helped me develop better worth ethic. I’ve learned to stay on top of my work,” said Beal.

Junior Hunter Giles is a morning student of the Center for Diesel Technology. 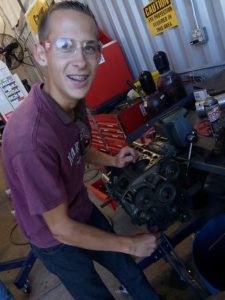 Giles repairing a motor and gaining the experience he needs for his future career. Photo courtesy Hunter Giles

“It’s a good program because it teaches [students] a lot,” said Giles.

Giles gained an interest in automotives from his father, who taught him how to work with motors and wiring when he was a child.

Giles has obtained knowledge in a variety of automotive subjects, which has allowed him to work on cars outside of school.

According to Giles, the best part of the center so far has been getting to go into the shop and work on motors.

When students get to go into the shop, they split into three teams and work on taking motors apart and putting them back together.

Giles is currently repairing a green 2001 Nissan Frontier with full wheel drive, and he plans to drive the truck to school by the end of the year.

Giles plans to pursue a career as a diesel mechanic after graduation.