Nasir “STEMs” out as national leader 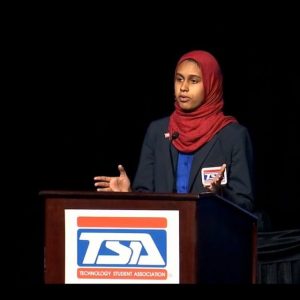 The Technological Student Association (TSA) is a national organization of students involved in science, technology, engineering, and mathematics (STEM). The organization spans over 49 states and 2,000 schools.

Nasir was elected into her position last June.

“The election process last year was hectic. I remember having my last final on Friday and getting on a plane on Saturday morning for the TSA National Conference,” said Nasir.

The road to becoming National President was tedious. Nasir had to make herself well known to over 10,000 people and had to find a balance between building professional relationships and personal trust with everyone attending the National Conference.

Nasir has been in her position as National President for six months.

“It was always a dream of mine to be National President. I never really thought it was attainable, but it is incredible to be in the position and to get to be so involved in TSA,” said Nasir.

Her responsibilities are widespread. She oversees the entire operation by planning meetings, events, and the National Conference; delegating tasks; keeping everyone connected and up to date; and representing the other members of TSA at other various events.

“I get so many opportunities to represent this organization and what we stand for. Last year I got to represent TSA at the White House with the Secretary of Education Betsy DeVos. It was a really cool experience,” said Nasir.

Nasir has been involved with TSA since seventh grade and the organization has led her to her passion.

“Through TSA, I learned about Biomedical Engineering. It helped me find a way to fuse my interests of both Biology and Medicine,” said Nasir.

TSA helped Nasir to find her future career and she works to help others do the same. Nasir is an intricate part in TSA 100, which is a program that helps underprivileged chapters of TSA fund their expenses to join and affiliate themselves as a chapter with the organization.

“I’m really excited to do this because I know there are members across the nation with financial issues, and I’m thrilled to help these chapters join TSA and expand our membership even further,” said Nasir.

However, Nasir works with TSA to help the community in more ways than one. The organization has a partnership with the American Cancer Society (ACS). Many delegations in the organization host activities throughout the year to raise awareness and funds for the ACS.

TSA has hosted several Relay For Life events at the local level, and at the state level, the organization has hosted events including Pie The TSA Officers and TSA Lip Syncing Battles to raise funds for ACS.

“Being  part of an organization that has a passion for giving is unbelievably rewarding. Seeing so many people on both the local and state level coming together to help a cause proves how much we are capable of achieving,” said Nasir.

Nasir has now been involved in TSA for seven years. She has held a myriad of positions including Chapter Secretary, Chapter Parliamentarian, State Parliamentarian, National Porter, and now, National President. She is a leader in the furthering of STEM subjects to students across the country.

“Sometimes you just wake up in the morning and pinch yourself because you can’t believe you’re a part of something so big,” said Nasir.