Life before the nest

A look into three teachers’ lives beyond the walls of Godwin

On the first day of school, students hear the credentials of their teachers, most often a list of colleges and degrees.This year, three new Godwin teachers introduced themselves to their students and brought unique experiences to their resume. 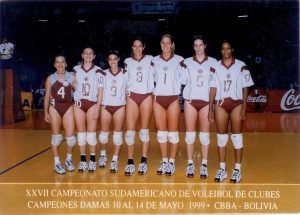 Many teachers dive directly into their career when completing college, others may come from different occupations looking for a change of pace.

Maria Villarroel Burruss, a new Spanish teacher at Godwin, had a much different past. Burruss played competitive volleyball for the Bolivian National Volleyball Team before her transition into teaching.

Burruss began playing volleyball in 1990 and started practicing more seriously in the following years. It was immediately a challenge for her.

“I started [playing] late and had to work hard in order to gain the respect and acceptance of my usually more experienced teammates,” said Burruss.

In indoor volleyball, Burruss had the most success playing on a variety of teams at the in-State level.

“Nationally my club and college team were always first or second. The state team was always on the podium,” said Burress.

“Beach volleyball was another story. We were among the best teams in Latin America,” said Burruss.

During her teenage years, she competed in a qualifying teenage World Cup tournament. This meant that she played for Bolivia against other countries for an opportunity to play in the 18 and under World Cup.

All of her experience paid off as she eventually began playing for the Bolivian National Team.

The expectations were high as participation on a national team is considered very grueling. The practice schedule for national tournaments required Burruss’ full dedication of time.

“If we were training for an international tournament for the national team, we were invited to a certain city to train six days a week for six to eight hours per day for a month or two before the competition,” said Burruss.

Although the national team never qualified for the Olympics, she still had the opportunity to play in a Pan-American tournament in the Dominican Republic while gaining valuable life experiences.

“My favorite part of the experience was the teamwork and the honor of representing my country,” said Burruss. 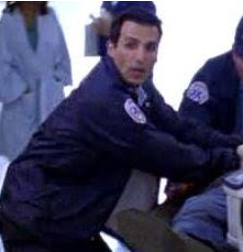 Coolidge from a still of his guest appearance on Lost. photo google

Most current teachers have past teaching experiences of lecturing in a classroom, yet Godwin teacher Todd Coolidge is able to look at his profession from a different perspective.

Before he was at Godwin, Coolidge tutored for various performing arts students in the New York City area.

“I needed a flexible job while trying to work as an actor/director in New York and at the same time, attending grad school at New York University,” said Coolidge.

Coolidge tutored young actors ranging from ages five to 18 on the sets of television, film, theatre, and recording studios.

While tutoring jobs were available across most of New York City, Coolidge was given other opportunities that he unfortunately had to pass on.

“I had opportunities to travel to Europe with some productions, but I had to turn them down because I was still enrolled in graduate school,” said Coolidge.

Through this job, Coolidge got to see what the behind the scenes life of a young performer was like. He worked with kids who had already achieved more in their field than most adult actors had.

Among the young actors Coolidge worked with, he could not pick one who was most significant or stood out most to him.

“These were young people who were sacrificing a normal childhood to follow a dream. Eventually some would continue on, [while] most of them decided it was not worth it,” said Coolidge.

While most jobs come with certain advantages, having a career in the performance world created unforgettable moments for Coolidge. He had the opportunity to meet entertainment icons who were involved with the students he was tutoring.

“I got to meet some tremendous adult actors and directors [such as] Matt Damon, Robin Williams, Angelina Jolie, and Robert DeNiro,” said Coolidge.

Coolidge’s favorite part of the job was watching the professionals work with the younger actors. He was impressed, but it was also a reality check for what the industry was really like.

“I learned a lot about the reality of the theatre, film, and television professions. The good, the bad, and the ugly, you might say,” said Coolidge.

Although he eventually had to leave the job to pursue a full-time occupation, he learned valuable life lessons and began to look at the performing business in a new way.

“I took away so much from the job, but perhaps the most important lesson was a reaffirmation of the resiliency and sacrifice that is involved in pursuing a career in performing arts. Every young person I worked with had to give up so much in order to follow their dream,” said Coolidge.

Coolidge made his own mark in acting and became noteworthy in the Godwin community for his role in the popular television drama series “Lost”.

He was a guest star, which meant that he had several lines in the episodes he was in.

Coolidge stumbled on the opportunity to be on the show when he moved to Hawaii, which was where the show was filmed.

“‘Lost’ was my favorite TV show at the time. I had been an avid watcher of the program when I was living and working in New York City.

When I moved to Hawaii, I decided to contact the casting department and request an audition. A week or so after watching the audition, I got a call offering me the role,” said Coolidge.

The acting job was a busy experience for Coolidge. He would arrive early in the morning for costume preparation, drive to the filming location, and film the different scenes many times from different angles.

“The scenes I was in lasted only a few minutes on screen, but took all morning to film,” said Coolidge.

Despite Coolidge being mostly known for his appearance on “Lost”, he still values his overall directing and acting more.

Coolidge teaches drama at both Short Pump Middle and Godwin and has recently directed the Godwin fall play, “The Musical Comedy Murders of 1940s” .

“While I will always value the opportunity I had on “Lost”, the stage remains my passion,” said Coolidge. 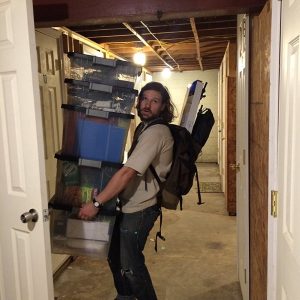 Reaves carrying all of the equipment for his feature “A Year’s Worth.” photo courtesy John Reaves

Once a student at Godwin, first-year English teacher John Reaves now plays the opposite role in the classroom.

A graduate from the Class of 2007, Reaves pursued various branches of entertainment including a punk rock band, and stand-up comedy. Most noteworthy, Reaves wrote, directed, and produced a film called “A Year’s Worth” shown at the Byrd Theather this past summer.

Reaves’ film was created with an ensemble of friends and family, and his wife Sarah Roan starred in the film.

“My mom and dad were executive proudcers on the film, and many people came to work excited for my mom’s lunches. I wanted to highlight some of my talented friends and family and involve a community within this film,” said Reaves.

Before moving back to Richmond, Reaves lived in New York City where he attempted to produce a film titled “Me and Lizzie” in 2014.

However, the film fell through due to complications during post-production.

Reaves credits falling in love with his wife for his later accomplishment in completing “A Year’s Worth”.

“When I met Sarah, love factored in because I had someone I felt beholden to. I wanted to complete this film process with her because she is my best friend. Love is a big aspect,” said Reaves.

Reaves began working on “A Year’s Worth” in 2015, and showed the film at Byrd theater June 3. Currently, Reaves is working on showing the film through other distribution avenues, although nothing has been determined.

“You learn from this process and take everything into consideration. You have to seek out these stories that are closer to real life,” said Reaves.

“A Year’s Worth” can be found on IMDb.

Before Reaves turned to film production, he was in a punk rock band, Swamp Things, which toured nationwide and across Europe.

“[The band] all started out as a joke,” said Reaves

Swamp Things was made up of former Godwin students, and Reaves’ brother who attended Tucker High School.

Deciding the band wasn’t for him, Reaves turned to stand-up comedy where he preformed at The Funny Bone in Short Pump and in New York City where he would meet his wife.

Reaves also majored in English at VCU with a minor in creative writing and was in the cinema program at VCU but dropped out after three semesters.

“I didn’t really feel like it was a good fit with my sensibility,” Reaves said. “I wanted to make comedies, and the cinema program was focused on independent arthouse cinema.”

After college, Reaves moved to New York City, but decided the city was not for him.

“In New York, there is no room for error,” said Reaves, citing the competition in each job industry. “I would also go out to dinner twice a week and my paycheck was almost gone.”

“When I decided to pursue film, I finally gave myself the permission to do what I wanted to do. I want my students to understand that they can do the same and explore their creativity,” said Reaves.

Reaves has also been able to apply the skills he has learned through movies, comedy, and his band to his classroom.

“[All my skills] boil down to communication. I have learned how to meet my students halfway, and help them enjoy my class,” said Reaves.

Reaves believes that “if there is something [his students] are passionate about, they can do it if they keep it up.”