“It could have been my son” 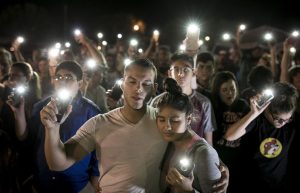 The Sutherland Springs Community gathered at a vigil for the victims of the First Baptist Church shooting in Texas. The shooter Devin Kelley had a history of mental illness and was admitted involuntarily to a mental institution.

“It could have been my son.”

Nine years ago, my uncle, who has suffered from mental illness his whole life, threatened my family- my nana- that he would buy a gun and do irreparable harm with it.

Later we would find out he was in a state of psychosis which the dictionary defines as “a severe mental disorder in which thought and emotions are so impaired that contact is lost with external reality.”

Later we would find out that the threats he made to himself and others were threats that a mind he no longer controlled had made. But damage had been done.

Gun violence has become an epidemic in the United States. Safety cannot be guaranteed at school, on a night out at a club, attending a concert, or even at church.

The “Washington Post” conducted a comprehensive study looking at mass shootings, defined by eight or more people dying, between 1966-2017. According to the study, in my 18 years of life, I have witnessed triple the number of mass shootings in comparison to my parents’ first eighteen years of life.

When one takes a closer look at many of these mass shootings throughout U.S history, a common factor can be found among many of the shooters: a history of mental illness.

In a study done by two professors at Vanderbilt University, 60 percent of perpetrators of mass shootings since 1970 displayed signs of mental illness.

In another study that analyzed suicide records of 81,704 individuals with a medical history of schizophrenia, bipolar disorder, or major depressive disorder, 72 percent committed suicide through guns obtained legally, and 28 percent barred from purchasing a gun were still able to obtain a gun through some method.

With an increase in the number of mass shootings occurring in the U.S. as well as a high number of individuals with mental illness committing suicide, there is concern over whether the current gun laws and background checks in place are providing the preventative measures needed for safety.

When filling out a background check, the respondent has to answer a series of yes or no questions including: Have you been convicted of a felony, declared mentally defective by a judge, or admitted to a mental institution?

“Admitted” is the key word in that sentence. To be considered ineligible to purchase a firearm one must be admitted involuntarily, against the individual’s will, to a mental institution.

For example, prior to making his threat, my uncle had been admitted 20 to 30 times to mental institutions. However, he had always been admitted voluntarily, despite at times, being escorted by police. This is because he went willingly with police rather than resisting.

Involuntary committals to mental institutions are rare. Outlined in the Mental Health Act of 2001, a person is labeled an involuntary committal if they pose an imminent threat to themselves and those around them or do not comply with the police.

A person is often admitted to a hospital before his or her condition meets this requirement. Therefore, like my uncle, those individuals are still eligible to purchase a firearm.

The simple statement is this: the current background checks in place do not provide the safety measures needed to prevent a mentally ill individual in a heightened state from obtaining a gun. However, the issue is not as simple. Should an individual’s right be taken away when safety is concerned?

Americans cannot yell “fire” in a crowded theater when there is no threat of a fire. In other words, when safety is questioned, rights are restricted. The same concept must be applied to second amendment rights.

If an individual intending to purchase a gun poses a threat to themselves and others, then they should not be allowed to buy a gun.

This is not a declaration to restrict anyone with a mental illness of their right to own a gun. Rather, preventive measures must be put in place that expands further than involuntary committals to prevent an individual in the wrong mental state from purchasing a gun and causing harm.

This could include proper data collection of voluntary committals and a waiting period and routine check-ins of individuals admitted voluntarily to a mental hospital before their eligibility to purchase a gun is restored. Background checks could also include psych evaluations that analyze individuals, determining if he or she is in a heightened and unsafe mental state.

Prevention such as this would not take away an individual’s right to own a gun, but rather allow the individual time to stabilize before taking on the responsibility of gun ownership.

However, in addition to purchasing a gun through a licensed gun store, other avenues exist through which mentally ill individuals may purchase a gun: private sales and gun shows.

This gap needs to be rectified by applying background checks to these gun sales. By holding these gun sales to the same standards of a licensed gun store with the addition of the solutions stated above in regards to voluntary data collection, the loopholes through which a mentally ill individual can obtain a gun will be better regulated.

As Americans, we are entitled to the right of “life, liberty, and the pursuit of happiness”. An individual’s right to own a gun should not impede these fundamental rights. No life, no freedom, no happiness should be taken away by the use of a gun.

The reality is that gun violence and mental illness are connected issues. Laws and measures put in place must reflect and take into consideration this fact.

Without preventative measures in place that protect those who are mentally ill from actions they often cannot control, and those around them from harm, gun violence and mass shootings will continue to be perpetrated by those not in the right mental state.

Despite the fact that my uncle was admitted into mental hospitals, despite the fact my family reported his threats over and over again to the police, and despite the fact he posed risk to both himself and those around him, my uncle would have passed a background check and been able to buy a gun whether at a store, through private sales, or at a gun show. Simple as that.

And the fear of the “what if” has always remained with my family. What if he was not vocal about his intentions to buy a gun? What if we were not aware of his threats and did not take the measures to stop him? What if he bought a gun and used it?

What if one day, my nana turned on the TV and above the headline breaking news thought, “That is my son.”?