Godwin students’ beach house to be featured on HGTV 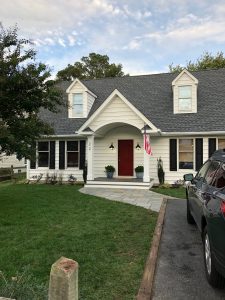 The remodeled house that will be featured on the show. photo courtesy Rebecca Rogers

Many Godwin students and their families own beach houses, but only one will soon be shown on TV.

Senior Rebecca Rogers and her beach house in Bethany Beach, Delaware will soon be featured on HGTV. Roger’s family has owned the beach house since the 1980s when her grandparents retired there.

Much like Rogers, her father grew up going to the beach for vacations and has inherited the home. The Rogers family spends most of their vacation time in Delaware and plan on retiring there as well. They plan to keep the house in their family for many generations in the future.

After swim practice one morning, Rogers’ mom informed her that there was a possibility of their beach house being featured on “Big Beach Builds”, an HGTV series that remodels beach houses. Rogers’ mom said that the chances of their house being selected and featured was very slim so Rogers thought little of the news.

“Big Beach Builds” stars a contractor named Marnie Oursler who renovates beach houses to make them more modern. Although the goal is to update the houses, she makes sure that the family history and charm of the house is still present.

In order to be a contender for the show, Rogers’s mom was required to fill out a questionnaire on the shows website

They received an email the next day explaining that the producers would like to do a couple of skype calls in order to receive more information on the family history behind the beach house. Once the skype calls were completed, the producers still had to pitch the idea to the HGTV network in order for the Rogers’ house to be picked.

A couple of days later, Rogers’s mom received a phone call confirming that their beach house was to be featured on the show.

“When my mom told my brother and I, we were shocked,” said Rogers.

Rogers, who has been going to her beach house since she was 6 months old, says that the house is a second home to her. She spends at least a month and a half every summer in Delaware.

They began filming in late August, starting with a tour of their beach house before the makeover. They asked for each family member’s opinion on what they needed or wanted to be changed.

The main focus of the renovation was to make the house look less like a home, and more like a beach house.

Seven weeks later, the Rogers family was invited to Delaware for the reveal of their remodeled beach house.

The show’s hosts completely renovated the outside and the first floor of their beach house.

The reveal took place on Oct. 16 and producers put cameras in the family’s cars to catch their reactions to the remodeling. Rogers’s parents were filmed separately from her and her brother in order to catch both reactions. They were then questioned on how they felt about the overall change and experience.

Tune in this coming March to HGTV’s “Big Beach Builds” to see Rebecca and her family’s beach house makeover.