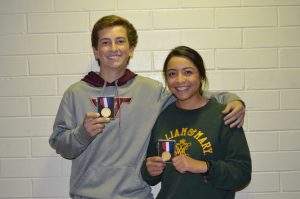 This year, a Godwin male and female each won their individual state titles in golf.

A duo from the same school has not achieved this feat since 2013 at Chantilly High School in Fairfax County.

Kennedy came from one shot behind and won in a playoff against Deep Run High School’s Charlie Hanson.

“I did not really feel any pressure playing with Charlie in the playoff. I have played with him so many times before, so I just imagine it like that,” said Kennedy.

Kennedy shot an even par round of 72 on the first day and four under on the following day.

“The greens [at Magnolia] were really smooth the entire tournament and ran at a good pace for me. In addition, my wedges were by far the best part of my game that week. I would say that the farthest shot away from the hole with a wedge was probably 10 feet,” said Kennedy.

Winning the state title wasn’t a specific goal of Kennedy’s heading into the season, but it is definitely a confidence boost,  according to Kennedy.

“All I really wanted do this year was make all-metro and all-state like my brothers [Curt and Andrew, Godwin alumni]. Winning this tournament is just a bonus,” said Kennedy.

Former Godwin golf star Mark Lawrence Jr. has reached out to Kennedy as have others.

Senior Diana Domenech is used to dominating the girls junior golf circuit. She placed second in the VSGA Junior Girls Championship two years in a row, tied for first in the College Prep Tour High School Invitational this season, and was selected for all-metro first team by the Richmond Times Dispatch for last season’s accomplishments.

This year she had her eyes set on winning the VHSL Girls State Open.

“Winning the VHSL Girls State Open has definitely been one of my goals this season,” said Domenech.

Domenech finsihed her final tournament with a co-win on Oct. 23-24.

Domenech lead after the first day, with a one shot lead over Granby High School’s Rebecca DiNunzio and continued to play well on day two, finishing her round tied with First Colonial’s Carley Rudolph.

Domenech tied Rudolph on the first hole of their playoff, and the VHSL elected them as co-champions due to darkness.

Many people have reached out to Domenech, and she is thankful for all of the support. According to Domenech, this recent win is exactly how she wanted to end her high school golf career, and she is already looking forward to college golf.

“I have committed to Longwood, and my coach was very impressed and proud of me,” said Domenech.