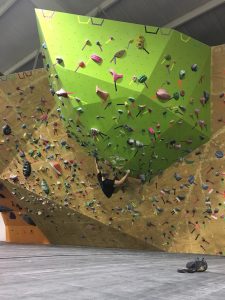 Sanne at Crimper’s Climbing Gym in Christiansburg where he placed fifth out of 10 people in his age group. photo courtesy Sanne

It is common to hear about students playing lacrosse, soccer, and basketball, but it is rare that you find someone who has turned to rock climbing as their major sport.

Junior Jake Sanne found his love for rock climbing during the summer after fourth grade when he and a friend signed up for Passages Adventure Camp. According to Sanne, the friendly and uplifting environment encouraged them to pursue the sport through another program that was connected to Passages.

“Passages is partnered with Peak Experiences and after your week of camp, they give you one free trial for the junior climbing team at Peak. I used my free trial immediately,” said Sanne.

After two years, Sanne felt confident enough to graduate from the junior team and join the higher-level training team. This team focused more towards preparing the climbers for competition and outdoor climbing.

Sanne saved his money and eventually was able to purchase a harness of his own to continue climbing throughout the years. After a while, Sanne became bored and took a break from the sport.

His time away from climbing did not last forever and in the ninth grade, he gave up tennis to rejoin the training team.

Sanne dedicated his freshman year to gaining strength and learning how to become a better overall climber. His hard work paid off in the summer before his tenth grade year when he tried out for the competitive team at Peak.

“I was really nervous about tryouts because I felt like everyone was a lot better than me, but I still managed to make it onto the team. Since I was on competitive team, I started going to competitions around Virginia,” said Sanne.

Sanne’s success in his first few competitions allowed him to qualify for the Bouldering Regionals at Vertical Rock in Manassas.

“The main difference between bouldering and actual rope climbing is that bouldering is a very compressed version of rock climbing, does not require a rope, and is a lot more strength oriented,” said Sanne.

To continue to qualify for regionals each season, each climber has to compete in at least two local competitions. This past spring season, Sanne competed in competitions at Peak Experiences and Vertical Rock.

“The spring season is how you would imagine climbing, scaling anywhere from 40 to 100 feet up off the ground. For a competition, it would be around 50 to 60 feet,” said Sanne.

He placed fifth out of 23 climbers at both the Peak and Vertical competitions. Since Sanne placed in the top six, he qualified to compete in the rope climbing regionals competition at Earth Treks in Maryland.

“For competitive climbing, I tend to lead climb, which is clipping the rope to the wall every couple of feet instead of having the end of the rope already tied to the top. I find it more fun and useful since that is how you would have to do it if you actually went climbing,” said Sanne.

This past summer, Sanne traveled to New River Gorge in West Virginia as well as Smith Rock State Park in Oregon.

During the current bouldering season, Sanne has already competed in one competition at Rise up! Climbing. He placed fifth.

“I do have a major love for the sport. And for me the major highlight of climbing is going climbing outside on real stone,” said Sanne.

Captions: Sanne at Crimper’s Climbing Gym in Christiansburg where he placed fifth out of 10 people in his age group.