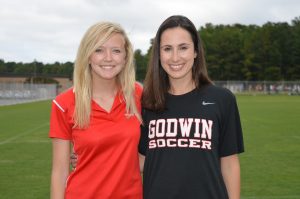 Two former Godwin athletes return to the field as head coaches this year. The two are among several coaching changes in the Godwin athletic program.

Wood, who ran at Godwin for four years and briefly for the University of South Carolina,  replaced history teacher Jon Lauder. Wood previously served as an assistant coach.

Both Lauder and Toole stepped down to spend more time with family.

Wood, still an active runner, said, “As a Godwin graduate, I always dreamed of coming back and coaching here. I am very thankful for the many opportunities that Godwin has given me to grow as both a coach and a person.”

Coach Lauren Abraham is not new to Godwin athletics. She was a four-year varsity girls soccer team member and  former captain. Abraham played an additional four years of soccer on the highly successful Washington and Lee team.

Abraham’s strong work ethic continued into her collegiate playing days where she spent long hours training to reach her peak.

“I spent my summers in college coaching Washington and Lee University’s Summer Soccer Camps and also was a volunteer coach at Rockbridge High School in Lexington my junior year of college,” said Abraham.

Abraham has served as the varsity girls soccer assistant coach in recent years, including the 2016 season when Godwin won its first state championship in soccer.

Abraham inherits a team that lost several talented seniors and could face a rebuilding period.

“I intend to remain at Godwin for the foreseeable future and I’m looking forward to continuing the traditions and rich history of the soccer program,” said Abraham.

In addition to Wood and Abraham, Godwin has hired new coaches for football, golf, step team, and dance team for the 2017-2018 athletic year.

This off-season began a new era for Godwin golf. Tom Hoy retired after 36 years of service, and Hunter Thomas filled Hoy’s shoes at the end of last year.

Thomas has led the team to a strong start this season, advancing to the Regional Tournament. The golf team finished third in the region.

“Godwin is a good school for both academics and athletics with good community support. The team knows I am honest and fair and will push them to their limits,” said Strine.

Godwin principal Leigh Dunavant said, “It is fantastic to have graduates of Godwin serving as coaches. And, we are also excited to have more coaches who also serve as teachers at Godwin. It is great for students to have the connection on the field or court and in the hallway too.”