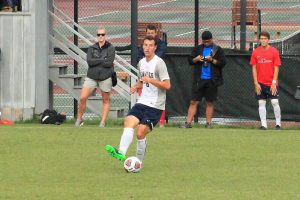 Current sophomore Ben Ahrens is playing on the Mary Washington soccer team, after graduating from Godwin in 2016.

“Personally, I am having a great year. After a lot of hard work over the summer, I found myself make my way into the starting lineup for the first time in my collegiate career. Ever since then, I have been having a great year as the starting defensive midfielder and am loving it. Our goals for the year are winning the CAC conference and getting an automatic bid into the NCAA tournament. We have not been to the tournament for 16 years, and we think we have the squad this year to do it. I’m loving my time here at the university. Working extremely hard both in the classroom and on the field, I am looking forward to my sophomore year at the University of Mary Washington!” 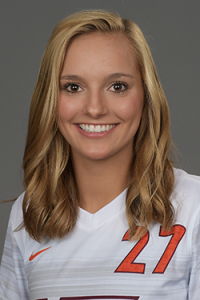 A freshman, Caroline Cipolla is playing as a defender in soccer for Virginia Tech after graduating from Godwin in 2017.

“First of all I want to say that I love [Virginia Tech athletics]. There may be days that are tough, but I absolutely love being a part of the athletic program here and I love the team and playing soccer. The difference in the soccer aspect between here and back home is that the game itself is a lot quicker. [I]have to make decisions 10 times faster than I did in high school. That’s probably the toughest and most drastic change of the game itself. The atmosphere is different too. The practices feel like tryouts every day. And thousands of people show up to games so that can be intimidating. Although the game itself may be more demanding, more intense, it’s still great to play for your school and be a part of the school’s athletic program.” 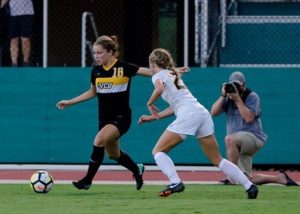 A freshman, Lyndsey Gutzmer,  is playing soccer at Virginia Commonwealth Univeristy after graduating from Godwin in 2017.

“Playing soccer at VCU has been a really great experience for me. It is similar to playing for Godwin in the overall team aspect. Everyone on the team is very supportive of one another and the coaches work hard to prepare us for each game, building our confidence and skill set. Being a part of this team has greatly enhanced my college experience so far, and it has been so fun to be a part of this extremely goofy and talented group of players. I have definitely been pushed harder than ever on this team because the expectations for fitness and ability are extremely high.” 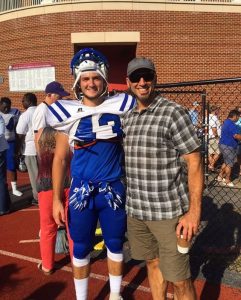 Matt Klein, a freshman at Christopher Newport University, is playing tight end for the Captains after graduating from Godwin in 2017.

“It’s just a crazy adjustment because you go from being one of the better players on your team in high school to a freshman playing against some grown men. Everyone is bigger, stronger, and faster in college and it makes things a lot harder. It’s definitely more of a commitment as well. It’s definitely something that I’m enjoying. Freshman year is tough because you have to really work your way back up, but I love the fact that my teammates are like brothers to me and knowing they’ll always have my back. There have already been memories that will last forever.” 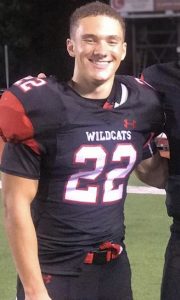 Previous Godwin star running back, Wesley Dugger, is currently lighting it up for Davidson College.

Dugger is a freshman at Davidson, and is playing the running back position. After winning Godwin’s Most Valuable Eagle, and graduating from Godwin in 2017, Dugger is off to a great start for the Wildcats.

In the past three games he has 62 carries, adding up to 377 yards. Not only has Dugger been racking up yardage, he has also scored several touchdowns.

In the first three games of his collegiate career, he scored three touchdowns. 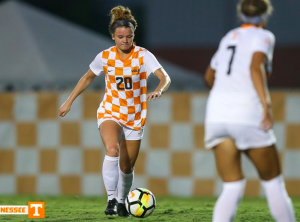 A sophomore at the University of Tennessee, Claire Franks, is playing for the Volunteers after graduating from Godwin in 2016.

“The difference of playing here in comparison to Godwin is the overall level of play, it’s much higher and just way more intense here. The family dynamic of the team is no different than what it was in high school though. I’m definitely fortunate enough to be able to say both in high school and now in college my team is my family and will have my back no matter what. I love it here and love that I get to continue playing with my sister. Being able to further my soccer career at Tennessee has truly been a blessing!”

STATS: one goal, five shots, one shot on goal, and 210 minutes played. 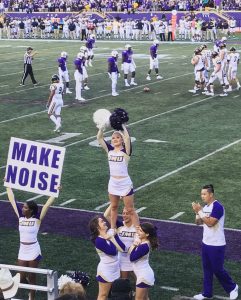 A freshman at James Madison University, Corinne Downum, is cheering for the Dukes after graduating from Godwin in 2017. 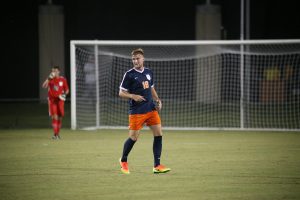 Redshirt junior for University of Virginia, Liam Jenkins, is playing midfield for the Cavaliers soccer team. Jenkins graduated from Godwin in 2014.

“There are a few big differences between high school/ club level and college soccer.  The time commitment is one – we spend between 25-30 hours per week getting treatment/training/watching film.  It is a lot different than the days of rolling into training 15 minutes before it starts and driving home immediately after. The level is obviously much higher, especially in top programs. Every guy on my team was the man on his club team or high school, and there is a big adjustment mentally when you get to a school where everybody is capable of big things.  Adding to that, I would say the athleticism is the most obvious improvement over high school or club soccer.”

A freshman walk-on at William and Mary, Will Barney, plays as fullback for Tribe football after graduating from Godwin in 2017. He is currently not getting much playing time, due to the Tribe’s deep backfield and recent injuries, but believes he will soon be at full health and be ready to make his name known.

“The players are a lot better in college and the speed of the game is a lot faster than in high school. Also, practice is much more intense. Overall, I like playing at W&M and I like my teammates a lot. I had a rough start last year and missed most the season with a shoulder injury, but I’ve come back strong and played well during camp, so hopefully I’ll make it on the game field in a few weeks.” 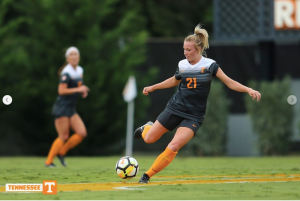 A freshman at the University of Tennesee, Paige Franks, plays soccer for the Volunteers alongside her sister after graduating from Godwin in 2017.

“The difference is huge. The speed of play doesn’t get much higher than here. I love it so much and the competition is so great. Our team is doing so well this season which makes it even more fun.”