No “justice for all” on college campuses 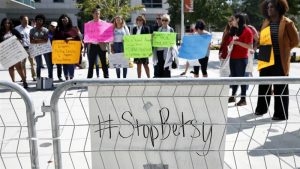 Protesters gather outside of George Mason during DeVos’ announcement about changes to Title IX policies on Sept. 7 under a sign reading #StopBetsy.

On Sept. 7, sexual assault survivors, students, parents, and advocate groups gathered outside George Mason University to protest the rolling back of their Title IX rights.

Sexual assault falls under the purview of Title IX as well.  The Obama administration brought to light the issue of sexual assault and harassment on campuses and universities in 2011.

Under Title IX, the Obama administration’s policy required schools to quickly and comprehensively respond to sexual assault allegations or federal funding would be withheld.  This provided victims with an avenue to report sexual assaults through means other than the taxing criminal court system.

By nature, sexual assault cases have little evidence and few to no witnesses.  If drugs or alcohol are present, victim reports are often overlooked.

Therefore, campus systems were to use the “fifty plus one” percent reasonability of evidence in determining if the accused violated school policy.

Along with guidelines for dealing with and reporting sexual assaults, there were methods for preventing and correcting sexual discrimination, responding to unique situations, and designating a Title IX coordinator.

The 2011 policy outline intended to encourage victims to speak out and trust that they would be listened to and respected after an assault, men and women alike.

According to the National Sexual Violence Resource Center, one in five women and one in 16 men are sexually assaulted in college, and more than 90 percent of assaults go unreported.

According to a government report, the percent of sexual assaults reported on college campuses rose 15 percent between 2010 and 2011.

It is clear that schools need policies like this that encourage students to speak out and foster an environment in which victims do not need to fear that they will not be heard.

Outlined in a “Dear Colleague” letter by the Department of Education in 2011, the policy released by the Obama administration was not a new policy, rather a reissue, a reminder to schools of their obligation to protect their students.

Because “Dear Colleague” letters are nonbinding, the Trump administration can easily repeal them.

And the administration already has, repealing an Obama-era “Dear Colleague” letter that allowed transgender students the use of bathrooms corresponding to their gender identity.

Next, the administration and the Department of Education, under Betsy DeVos, plans to repeal the 2011 “Dear Colleague” letter, elaborating on the rights of sexual assault victims on campus.

DeVos seeks to rescind the Obama-era policy to favor the rights of those accused. She believes, when considering the epidemic of sexual assault on campus, “one denied due process is too many.”

DeVos’ decision to scale down Title IX will not protect students and survivors of sexual assault.  Rather, her decision protects the accused, the abusers, the rapists.

Her intent, but not specifics, was announced officially at George Mason University as protesters and survivors gathered outside, chanting “Stop protecting rapists” and “Can you hear us?”.

Preceding the announcement, DeVos met with sexual assault survivors and groups (End Rape on Campus) once for 90 minutes and then with advocates of the wrongly accused (National Coalition for Men) for another 90 minutes.

Although hard to pin down, false rape allegations account for only two to eight percent of reports, according to Stanford MAAN. This rate is no higher than the false allegation percentages of other felonies.

Considering the small fraction of rape reports found to be false, it seems misguided for the DeVos office to be focusing only on aiding the two percent.

DeVos shows a blatant ignorance toward the complexity of sexual assault cases and a disregard for victims and the difficulties already faced in bringing an assault to light – protecting the accused will only discourage the abused from stepping forward.

The support for the accused over the victims is perpetuated by an administration that never seemed to have respect for sexual assault victims.  Mr. Trump has an astounding 12 individual allegations of sexual assault, and his campaign was littered with overtly misogynistic comments.

The administration’s disconnect with the reality of sexual assault is seen with Candice Jackson, DeVos’ Deputy Assistant Secretary for Strategic Operations and Outreach in the Office for Civil Rights, comment that “90 percent of campus sexual assault allegations fall into the category of ‘we were both drunk’ or brought by unhappy ex-girlfriends.”

A conversation about how to help victims and survivors is always desired. However, DeVos finds it easier to focus on the sexual assaults that didn’t happen, rather than confront the ugly truth of rape culture in American campuses.

There is merit in changes to the current system.  It is not perfect, but changes need to be made that encourage the victims of assaults to come foreward more often, fighting the stigma of sexual assault on college campuses for both men and women.

It is overtly disrespectful to survivors of sexual assault to repeal guidelines that provide victims with a platform to speak up about their assault.

Expecting appropriate sexual assault convictions when policies are designed to protect the offender is a clear message from the administration: they are not on your side if you are sexually assaulted.

Repealing the current system and starting over will only cause confusion – confusion through which victims and the guilty will fall through the cracks.

Former Vice President Joe Biden, proponent of the 2011 sexual assault reforms, said, “The truth is, although people don’t want to talk about the brutal reality of sexual assault, especially when it occurs in our most cherished institutions, it is our reality, and it must be faced head-on.  And any changes that weaken Title IX protections will be devastating.”