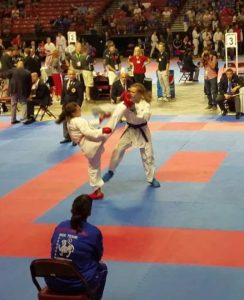 Growing up, most parents pushed their kids to play sports such as soccer, football, or basketball. However, freshman Natalie Kudelya never put on cleats or a jersey. Instead, she learned the art of karate.

Kudelya has taken her skills to the highest level, and competes with the Junior Team USA National Karate-do Federation (USANKF).

“To make the international team, you have to win first place in the United States. One person per age group, gender, and weight class gets to [become part of the team],” Kudelya said.

With the World Union of Karate-do Federations, Kudelya competed in Poland and Ireland.

Kudelya is set to compete in Tenerife, Spain at the Junior World Championship with USANKF on Oct. 22 to 30.

“My favorite place to travel was Poland because it was so big and it was so diverse, and also it was my first world championship,” said Kudelya.

In order to reach this international stage, Kudelya has put in long hours of training. Kudelya trains year-round, having instruction approximately 26 hours per week.

Kudelya trains at Justice Karate off of Broad St. and her trainer is her ninth degree black belt grandfather.
“I’ve always been trained by my grandfather, but I have other coaches … my grandpa is still my main coach,” Kudelya said.

Kudelya is currently in the heavyweight weight class, 64 kg and above, and is in the lighter portion of this class.

“I like being a smaller heavyweight because then I can beat my opponent with my quickness, and not have to worry about pure strength,” Kudelya said.

“My least favorite category by far is footwork, and my favorite drills are speed drills,” said Kudelya.
Karate was voted as an official Olympic sport by the International Oympic Committee. Karate will first appear in the Olympics at the Japan Olympics in 2020.

Due to her position on the Junior Team USANFK, Kudelya is already being considered to become a future Olympian.

Being a freshman, and new to the high school workload, Kudelya has had to manage her time in order to accomplish all of her schoolwork on top of karate trainings. She has found that being focused in lunch study has been her lifeline in the first month of school.

Although the hours of her training are long and arduous, Kudelya would not have chosen another activity to do even if she was given the choice.

“I think if I were to do this all over again, I would still choose karate, and I can’t wait to go to Spain this October,” said Kudelya.