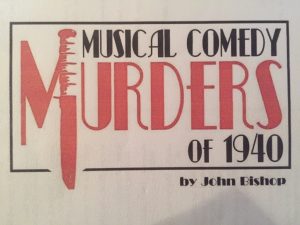 Set in the mansion of socialite Elsa Von GrossenKnueten, the play “The Musical Comedy Murders of 1940” takes the audience on a dizzying adventure to solve the murders of the notorious Stage Door Slasher.

The play is set back in the 1940s but has a comedic and  modern touch with witty banter spread throughout the script.

Director and new drama teacher Todd Coolidge is excited for the audience to solve the cryptic mystery of the play while laughing along the way.

“Groups of  production teams come together [at the mansion] to make a Broadway musical, but some are trying to solve a murder that took place in reality,” said Coolidge about the play’s plot. “Essentially, they are laying a trap to catch the murderer.”

Because the characters are snowed in at an old mansion that is riddled with many secret passageways, it becomes very suspenseful when figuring out who the murderer is. They have absolutely nowhere to run if things go bad.

Coolidge also stated that people tend to forget how much actually goes into putting on a play. Meeting with all of the parent boosters and the individuals who are experienced in construction, going to tons of thrift shops, and looking through the costume room are all parts of preparing for a show.

Coolidge and the cast are excited to see the play come together. According to Coolidge,  finally seeing the end result after weeks of nothing but super hard work and determination during rehearsal is truly what makes theatre so special to them.

Junior Sarah Welch, who has been acting since she was three years old, is more than ready to see everyone trying hard to solve the big mystery. Welch plays a very independent, rich producer in the show.

“I love the approach I am taking with this role,” said Welch.

According to Welch, she envies her character for being so confident and for always thinking so highly of herself. Although Welch does not have the same characteristics as her character, she is prepared to act out her role as best she can.

By watching other productions of the same play, senior Olivia Marshall, one of the performers on set, is able to visualize all of the scenes in her head so she can recognize when and where to say her line.

“I will try and speak along with them, so I can memorize everything I need to so I don’t mess up,” said  Marshall.

Marshall is playing a German maid and just like her character, when Marshall wants something bad enough, she will stop at nothing until she gets it. Marshall also expressed how she loved the way her character presents herself more than anything else.

Having stage fright and not being able to deal with it properly can completely ruin an entire performance.

“Anyone that knows me, knows I’m a pacer,” said junior and actor Davis West. Before a show, West will pace back and forth behind the stage to calm his nerves.

Performing in any production can be nerve wrecking and no matter how scared someone gets, they can not let it interfere with the way they act. In order to grab everyone’s full attention from the audience, you have to act as if there is no one watching.

“The more experience you have in the theatre arts, the better. Once you’re comfortable performing in front of large parties, stage fright is no longer a problem,” said West.

“I’m not here to make them professional actors, but I feel as though the skills these kids will obtain will help them in everyday life no matter what path they take,” said Coolidge. He expressed how people who take theatre will gain confidence and self-esteem and will learn how to analyze one’s character.

When reading through the fall play for the first time, Coolidge said how happy it made him to see how eager everyone became.

“It reignites everything in me to see them excited about the play. To see their creative process flowing at such an early stage…I feed off that.”

Coolidge and all the members of the cast and crew highly encourage you, your family, and friends to go and see the show when it comes out.

“The talent we have here is truly unbelievable,” said Coolidge. “Someone from every generation will find something about this play very amusing.”

Tickets will be sold in advance the week before and and of the play in the commons. At the time of press, ticket prices have yet to be determined.