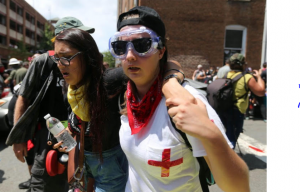 photo courtesy Kailey Adkins
Adkins (l) is carried away after being sideswiped by Fields’ car on Aug. 12.

Charlottesville has seen white supremacist and KKK protests before, but nothing on the scale of Aug. 12.

Tensions have been building in Virginia and all over the United States for months, particularly over the removal of Confederate figure statues.

The Aug. 12 “Unite the Right” rally was planned by Jason Kessler to protest the city vote to remove the statue of Confederate General Robert E. Lee in the center of Emancipation Park, formerly known as Lee Park.

Momentum for the rally grew on both sides of the movement, and on Aug. 11, a group of torch-wielding marchers organized on University of Va. soil chanting phrases such as “Jews will not replace us” and “blood and soil”.

Aug. 12, hours before the rally was to begin, thousands of protesters and counter-protesters flooded Charlottesville streets and parks.

Kailey Adkins, a 2016 Godwin graduate, attended the counter-protest with Virginia Student Environmental Coalition (VSEC).  She heard about the counter-demonstrator movement a week prior through a progressive activism club at George Mason University where she is a student.

“I was expecting it to be contentious with violence … I wasn’t prepared for the violence to be at the level it turned out to be,” said Adkins.

As violence broke out, officials declared the gatherings as an unlawful assembly and announced a state of emergency.

Adkins’ coalition met up with another coalition that included anti-fascists and Black Lives Matter. They stood in solidarity with a black community at Friendship Circle after word arrived that white supremacists were coming to intimidate them.

At 1:42 p.m. on Aug. 12, James Alex Fields Jr. drove a car into a group of counter-protesters in downtown Charlottesville.

Heather Heyer, 32 years old, was killed and 19 others were injured.

“We were walking back to Justice Park for a debrief after the chaos, on 4th and Waters.  When I heard the sound, I thought it was the clash of riot gear, but only when I saw bodies flying in the air I realized it was a car.  I was already on the ground at that point,” said Adkins.

Off-duty medics, denoted by a duct tape “X” on their clothes, aided victims of the accident, including Adkins and two of her friends.

The violence has sparked Americans on all sides into action, as there have been additional racially-motivated rallies in the wake of Charlottesville, most recently in Boston.

Charlottesville was still reeling as new and returning UVA students moved back into campus for the 2017-2018 school year.

UVa has held a mass candlelight vigil on Aug. 13 to show support of their community and student body.

Gigi Justis, a 2016 Godwin graduate and UVA second year, said, “[Professors] want to make sure students know that [UVA] is a safe place and that intolerance will not be tolerated on grounds.  A lot of [clubs] have organized marches and vigils to show that we can peacefully gather to celebrate diversity instead of condemning it.”